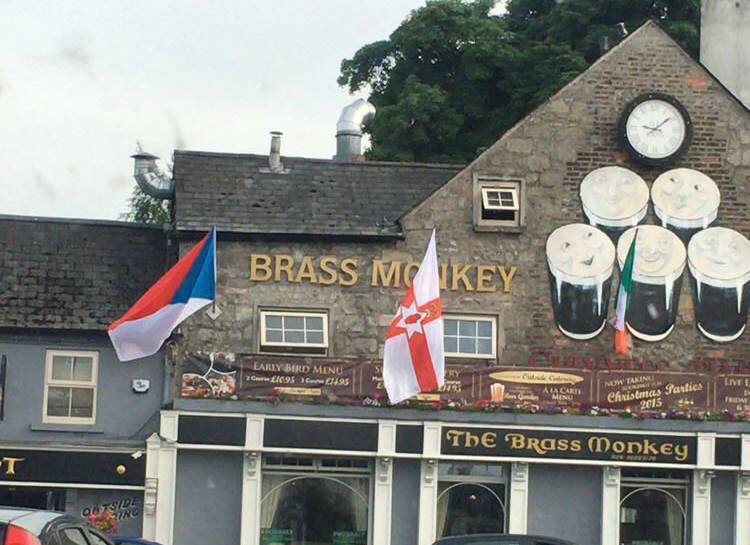 A Newry bar has removed football flags from its premises after being threatened.

The Brass Monkey has taken down four flags which had been put up for Euro 2016.

The Sandys Street venue is a firm favourite with sports fans in the Co Down city, and is marking the football championships with drinks promotions and screening matches throughout.

But within a day the four flag poles remained and the flags had been taken down.

An anonymous telephone call had ordered that the flag erected for the Northern Ireland team – who play their opening match tomorrow (Sunday) – be taken down.

Management were informed that the premises would be burned to the ground if the flag was not removed.

And, rather than single out the Northern Ireland flag, the venue – which is frequented by all sections of the community – decided to take down all flags.

Local Ulster Unionist MLA Danny Kennedy is a huge football fan and earlier this week tweeted a photograph of himself via Twitter wearing the Northern Ireland top.

Mr Kennedy bought the top in a shop in Newry, where it was being sold, quite rightly, side by side with the Republic of Ireland football team jersey, with “no issue”.

He said he could understand the action taken by the bar in removing the flags and condemned those who had made the threat.

Mr Kennedy, speaking to the Belfast Telegraph, said: “It is not at all in the spirit of the Euros generally. All over the island, north and south, there has been widespread anticipation and enthusiasm at the success of the team.

“It’s a sad reflection on the character of the person who has thought it necessary to issue this threat. It says much more about that individual than it does about genuine football fans and sports lovers.”