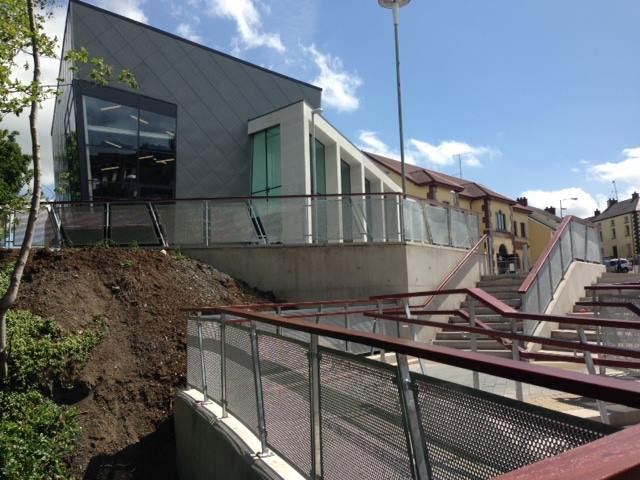 The new Tommy Makem Community and Arts Centre is due to be completed within the next couple of days.

And an official opening event is expected in the middle of next month.

The centre has been named after Tommy Makem, who shot to fame as both a solo artist and alongside the Clancy Brothers, and who died in 2007 in the United States, where he had set up home in the 1950s.

SDLP Councillor Thomas O’Hanlon said the centre was now “almost complete” and “plans are now being put in place to organise an official opening”.

Councillor O’Hanlon, who has led the Council’s Keady Working Group during the planning and development of the project, said the state-of-the-art development was now “looking really well”. “We are in the process of making plans for an official opening which we expect to happen mid-September, the details of which will be revealed once all has been finalised,” he said.

“The new community centre is a stark difference to the old centre. The old centre had outlived its use and was in a terrible state. We now have a bright, modern multi-functional centre which I know will be well used by all in the local community. There has already been a lot of interest from groups and organisations looking to use the centre which bodes well for the future.

“Initially we will hold an information evening for groups who have expressed an interest in the using the centre, possibly as early as next week, before opening the centre for people to come in and have a look around the facility. I know there is a lot of interest in the centre and its opening is very much anticipated.

“The centre is just one part of a major investment in Keady by the council. Just last year we had the new play park in the Glen complete and it has been a huge success and in the coming weeks a contractor will be appointed to carry out the environmental improvements scheme.

“This is all part of a much needed and much welcome investment by the council in Keady.

“Of course, with the centre being named after Tommy Makem we hope that this will act as a key economic driver for the area. Time and time again I have been approached by tour operators looking to know about the home of Tommy Makem so a display on his life and musical achievements is to be included in the centre.”

Nephew of Tommy Makem, Peter Makem has welcomed the completion of the centre saying: “As a family we are delighted that Tommy is to be honoured in such a way in his home town and want to place on record our sincere thanks to all involved.

“Keady is a very different place to the town he left in the 1950s and I know he would marvel at this fantastic centre in the heart of Keady. Tommy was very proud of his routes in Keady and of the local song and story telling tradition, what better way to celebrate his contribution to the world of Irish Music than by allowing that great tradition to continue in his home town?”