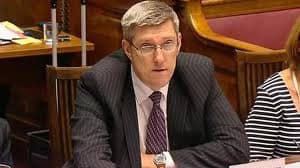 Twenty-two projects across Northern Ireland – described as being in “advanced planning” – have been given the go-ahead subject to planning consent.

They include a new-build to encompass the existing schools of St Mary’s, St Paul’s and St Michael’s Grammar Schools in Lurgan.

Also approved are a new primary school for the amalgamated schools of St Joseph’s and St James’ in Poyntzpas, and a new-build for Portadown Integrated Primary School.

Fourteen of the projects – outlined at Stormont – are for primary schools, with eight  post-primary

Education Minister John O’Dowd (pictured) – revealing details of the new-builds to the Assembly – also announced that the School Enhancement Programme, aimed at refurbishing or extending existing schools and worth up to £40million over the next two years, was being opened to applications from today (Tuesday).

Mr O’Dowd said: “In June last year I set out my Department’s capital investment plans, which included an investment of over £133million in 18 new-build projects. Work on these projects is progressing well and I am confident that the first of these will be on site early in the new financial year.

“This reflected my aim of providing a first class education to every child in our school system, despite the challenge of balancing limited resources against the large-scale capital investment needed across the estate.

“Today I am announcing a further 22 projects to be advanced in planning, representing a substantial potential investment of some £220million. The projects, 14 of which are primary school projects and eight post-primary, have been considered within the context of the area planning work being undertaken and form part of the long-term provision within their respective areas.

“The projects are aimed at either addressing serious or substandard accommodation inadequacies, or at effecting agreed rationalisation of the schools estate.

“Six of the projects will see permanent new-build solutions for Integrated and Irish-medium schools currently located almost exclusively in temporary accommodation. Fourteen of the projects, meanwhile, are required to deal with previous or planned amalgamations or rationalisation within the estate.”

The Minister highlighted that the authorisation to proceed with construction on each project would be based on the level of capital funding availability at that time and all necessary approvals being obtained.

Mr O’Dowd continued: “I have previously made it clear that the capital budget available meant we had to do more with the existing estate. That is why I established the Schools Enhancement Programme and I am pleased that I can now open the programme for applications. The available funding will be prioritised on projects aimed at improving existing facilities and enabling structural changes needed across the estate.

“Today’s announcement is a continuation of the pragmatic approach I have taken to ensure strategic and effective utilisation of capital investment in the schools estate.

“It is also good news for the pupils, staff and wider communities of the schools due to benefit from this significant investment and will be welcomed as a much needed boost to the construction sector over the coming years.”