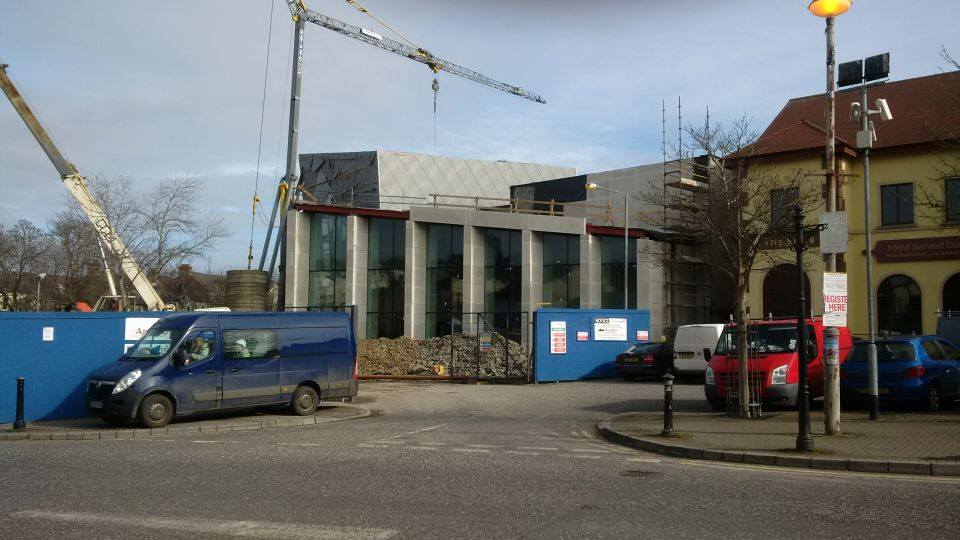 Work on a new multi-million community and arts centre in Keady – named after the legendary Tommy Makem – is due to be completed within a matter of weeks, Armagh I can reveal.

After years of lobbying by local representatives for a new state-of-the-art community centre to replace its rundown predecessor and the job has now been done.

And the development has been progressing well and is on schedule to be completed next month. It will stand as a lasting memorial to the town’s most famous son, a musician who took Irish traditional folk music out of the shadows and put it centre-stage!

Tommy Makem was born in Keady and died eight years ago, on August 1, 2007, in his adopted home of Dover, New Hampshire. He was 74.

He has forever linked Co Armagh with the United States and his music, most famously with the Clancy Brothers, is still enjoyed and celebrated around the world.

He has had the honour of having a bridge posthumously named after him in the US.

And now his home town can boast a fitting and appropriate tribute to stand as his legacy.

The new centre – constructed at a cost well in excess of £2 million – is a spectacular development, inside and out, designed by da Architects in Armagh, which has also designed the plans for the new Culturlann earmarked for the former Fire Station in the city.

It was in September 2012 that Armagh I revealed that Armagh City and District Council had agreed, on the proposal of local SDLP Councillor Thomas O’Hanlon, to name it the Tommy Makem Community and Arts Centre. It was not until February of the following year that planning approval was given, allowing works to go out to tender and then to move on site.

And now, just weeks from completion, it is expected that a high-profile launch will be arranged.

A council source told Armagh I: “All those involved with the plans have been delighted to watch the centre coming on and there is real excitement that we are now at the final stages. It’s remarkable inside – a well-lit, spacious venue that will serve so many functions for years to come.

“The links between Armagh and Tommy’s American home in New Hampshire have been kept alive over the years. Americans regularly travel over for the annual Tommy Makem Festival of Song and the next time it is staged the new centre will be able to be used to host some of the events.

“Family members living round Keady and Derrynoose have been proud to watch it taking shape and are looking forward to seeing it opened. “There have been no firm plans drawn up yet as to what form the actual opening will take but those involved from day one will want to ensure it is given an appropriate launch and one befitting a centre of such importance.

“It is hoped that guests will travel over from the States and that members of Tommy’s extended family on both sides of the Atlantic will be able to come along and see for themselves this magnificent new addition to his native town.”

Last December councillors and officials had enjoyed a site visit to review the ongoing construction for the new centre and were said even then to be “really impressed” by what they had seen.

Tommy Makem was a singer, a songwriter, a storyteller and poet, and he and his mother Sarah before him are held in great esteem the world over for their contribution to preserving traditional music and, in particular, the Irish song tradition.

But despite all that, Tommy never forgot his roots, the place of his birth and the people of his native town.

Each year since 2000 the towns has hosted the Tommy Makem Festival of Song and, part of that, includes the presentations of the ‘Keeper of the Tradition’ awards for those who have similarly helped preserve the traditional Irish way.

On the other side of the Atlantic, it is quite apt to hear that, while Keady is planning to honour the legend that is Tommy Makem, this year’s Milwaukee Irish Fest will also ensure his memory lives on. Milwaukee Irish Fest is the world’s largest celebration of Irish music and culture, a four-day festival showcasing more than 100 entertainment acts on 16 stages, and taking place this year from August 13 to 16.

Tommy himself was a longtime supporter and now, established this year as a tribute to his memory, the Tommy Makem Cultural Legacy Fund will support individuals who are promoting and living a legacy of Irish music and culture, through an annual grant or scholarship.

Ed Ward, the founder of Milwaukee Irish Fest, said: “Tommy Makem is a legend in the Irish music world, and was a dear friend and supporter of the festival.

“By funding his legacy, we are ensuring continued support of the preservation of Irish music and culture for years to come.”