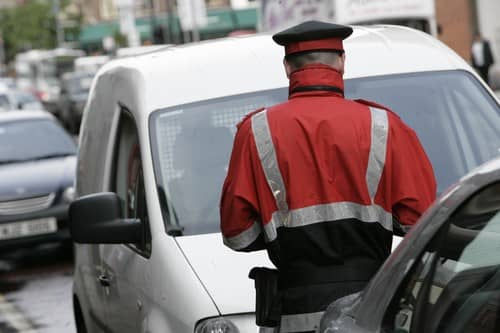 Motorists in Armagh City were hit with more than 2,300 parking tickets last year – but it wasn’t a patch on Newry!

And, at the same time, an unfortunate motorist put Milford can boast to picking up the first parking ticket in the village in the past five years.

The most recent figures, for each of the past five calendar years, were issued by the Department for Regional Development today (Wednesday).

The figures detail towns and villages across the Province where, collectively, a total of 108,525 were written.

Markethill saw its lowest number issued in the past five years, with 20 handed out. This compared to 85 in 2013, and 101, the town’s biggest tally since 2010, the previous year.

The number of tickets in Richhill reached single figures, at only eight, for the first time since 2010.

And in Tandragee 16 tickets were imposed, which is up just one on 2013.

Meanwhile, 2014 also brought Milford’s first parking ticket since prior to 2010.

In Lurgan 1,883 penalties were handed out in 2014, down just two tickets from the year before.

Newry, meanwhile, was one of the hardest hit areas in the Province.

The figures issued today included the annual figures from 2010 through to 2014 and can be accessed via the following link: http://www.drdni.gov.uk/parking-enforcement-notice-information

From April 1, 2015, responsibility for off-street car parks will transfer to the 11 new councils.

But figures for the numbers of penalty charge notices for on-street car parks will continue to be provided by the Department.

A spokesperson for the Department for Regional Development said: “We provide parking enforcement to encourage drivers to park properly and to reduce the number of illegally parked vehicles. The benefits include less congestion, more available parking spaces in town centres and car parks, and improved safety for all, but drivers are expected to park properly whether traffic attendants are present or not.

“The number of penalty charge notices issued in any one town or area depends on many factors, not least of which are the size of the town, the extent of parking restrictions and the volume of traffic.

“These factors, plus the level of illegal parking will influence where traffic attendants are deployed. TransportNI has to prioritise its limited TA resources so that it can provide an effective and balanced enforcement service.

“Everyone who receives a penalty charge notice is entitled to challenge the issuing of the PCN.

“Should the challenge not be successful, the recipient can then make formal representation of evidence. If this second stage is also unsuccessful there is the final option of going to appeal with and independent adjudicator, if they feel it was unfairly issued.

“This will require appellants to provide as much information as possible to allow full consideration of any appeal.”