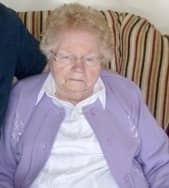 The mother of bother others murdered by a loyalist gang during the troubles has died.

Sadie Reavey, from Whitecross in south Armagh, died on Monday. The widow, who was in her early 90s, had long campaigned for justice for her sons.

John Martin (24), Brian (22), and Anthony Reavey (17) were gunned down by the UVF in their Whitecross home in January 1976. John Martin and Brian died instantly. Anthony died weeks later.

The killings took place in one of the conflict’s bloodiest periods.

Three members of the Catholic O’Dowd family were murdered by loyalists in Ballydougan, Co Armagh, that night, while republicans killed 10 Protestant workmen in Kingsmills the next day.

The Reavey killings have long been a source of controversy, with claims security force elements colluded with the loyalist killers.

She said: “Sadie and her husband Jimmy, forgave and prayed for their sons’ killers. She was a woman of true peace and an example to all of us.”