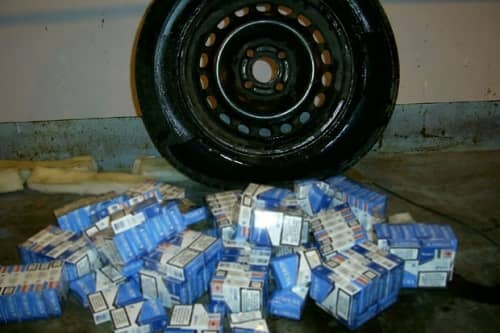 Two men, from counties Down and Armagh, involved in an attempt to smuggle over eight million cigarettes across the border into Northern Ireland have been handed jail sentences.

James Francis McDonnell, 41, from Ferryhill Road, Newry and Michael Fearon, 21, from The Village, Jonesborough, were arrested by HM Revenue and Customs officers (HMRC) in June 2010.

The pair were caught trying to escape from an industrial unit in the Killeavy area of south Armagh.

They were offloading cigarettes from a 40ft container into a transit van for distribution across Northern Ireland at the time.

Fearon absconded after his arrest in June 2010 and was sentenced to one year in jail and one year on licence in his absence.

John Whiting, the HMRC’s Assistant Director of Criminal Investigation, said: “These men were involved in a plot to flood Northern Ireland with millions of illegal cigarettes, which would have deprived the nation’s public services of nearly £2million in revenue.

“We will not stop in our pursuit to bring those involved in this type of criminal activity before the courts.

“Tobacco smuggling is organised crime on a global scale. It encourages and supports criminality within our communities, robbing taxpayers of millions each year in unpaid duty and VAT.”