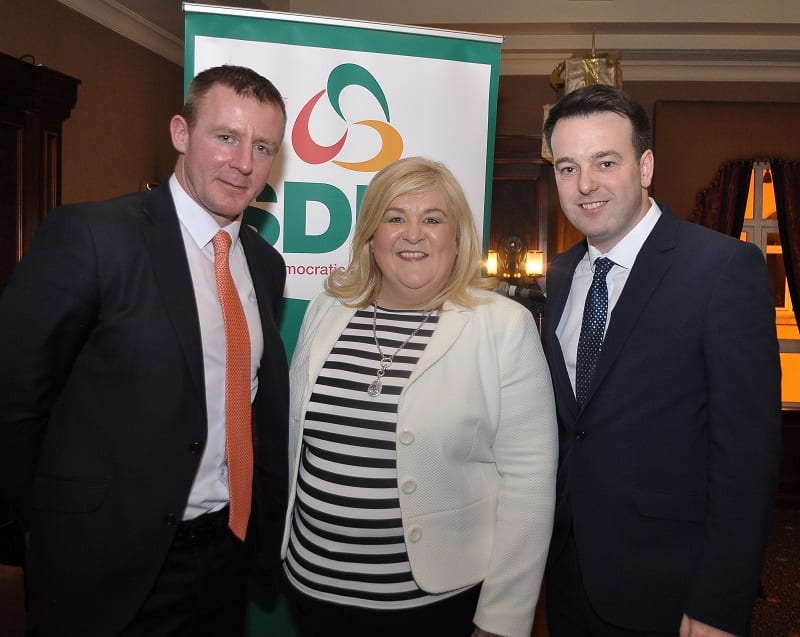 The SDLP have selected Karen McKevitt MLA and Justin McNulty as their candidates for the Assembly Elections next May at a packed convention held in the Canal Court Hotel in Newry on Sunday Evening.

Newly elected SDLP Leader Colum Eastwood was in Newry for the event and he said: I’m delighted that we have two strong candidates in Newry and Armagh like Justin and Karen. As a team they’re a formidable pair and I’m confident that we’ll make gains here that will build on the substantial progress made at the Westminster election.’ Justiin McNulty, left, and Karen McKevitt are congratulated on their selection as candidates in the forthcoming Assembly elections by SDLP Leader Colm Eastwood. CREDIT: LiamMcArdle.com

“I also want to pay tribute to the service of Dominic Bradley both to the SDLP and to the people of Newry and Armagh. Dominic had to fill the shoes of political giant Seamus Mallon and there’s no doubt that he’s done us all proud during his time in the Assembly. His work on the Autism Act, on developing and promoting the Irish Language and all the work he’s done for his constituents has distinguished him as a respected and senior member of the SDLP. He’ll be missed by our team.

“But looking ahead, I’m confident that our local Newry and Armagh team is going from strength to strength. Justin and Karen have the passion and the vision to shape a future for people here that’s better than what has been delivered by other parties. More and more, the SDLP is the alternative to stagnation at Stormont and to callous Tory diktats. Where we lead, others are following. Justin and Karen will lead that alternative for local people, they’ll have an important place in our Assembly team and I look forward to supporting them both in the time ahead.

Karen McKevitt MLA added: “I am honoured and delighted to have been selected by the SDLP members in Newry and Armagh tonight to fight the Assembly Election in May, we’re going after two seats and it’s battle we intend to win.

“The SDLP is perhaps needed more in the next Assembly than ever before. We have never been more relevant.  The peace process was hard fought for, but 17 years later the process is failing our communities. A government is meant to serve the people, but here we have a government that serves government.’

“People in Newry and Armagh tell me that they are fed up with the stop/start nature of our politics; they want our politicians to concentrate on real issues such as improving our health services, shortening waiting times, investing in our children’s education and to provide jobs and investment opportunities right across our urban and rural communities.’

“The people, our society, need a strong party that is willing to stand up for the vulnerable, for the working man and woman, for children, for the sick, for absolutely everyone across Newry and Armagh and they are aghast at the recent deal between Stormont’s big two parties and their new cronies in the Tories.  We’ll be taking the message loud and clear to the doorsteps of Newry and Armagh, when Justin and I are in Stormont we won’t sell out our people.

Justin McNulty added: “Newry and Armagh has always been a major part of the SDLP and so too has the SDLP been a big part of Newry and Armagh.  Seamus Mallon represented this constituency with pride and distinction as a Councillor, MLA and MP. He stood up for everyone in this community when nobody else cared.  Dominic Bradley has been the Assembly Member for this constituency for twelve years and he has proven to be an outstanding representative.  He has been a bulwark of everything the SDLP stands for, and he represented the constituency with utter integrity and honour. He leaves a record of solid honest work the SDLP can be proud of.

“I am honoured to follow in the footsteps of these two giants of Irish Politics in this constituency.  They are big boots to fill, but it’s a challenge I will relish. I want to build on their good work and with Karen, I belive we will make a formidable team.

“As I travelled this constituency over the last twelve months, people are clear in their message, they are yearning for a new politics here, they are fed up with the bickering they see on their television at night from Stormont.  They see the current regime as having failed our communities and our people; they want new thinking, new ideas and real leadership.

“2016 is an important year, for many reasons.  The SDLP will seek to commemorate this centenary in a way which will reconcile and not divide.  We will commemorate 1916, both Easter and the Somme in a dignified and inclusive way, both events shaped our shared Irish history and taught us many lessons we should never forget.

“In the weeks and months ahead, Karen and I will be on every door, engaging with people, listening to them and we will pledge to do our best to represent them and their families and can only do that when the SDLP return two Assembly Members in May for Newry and Armagh.”