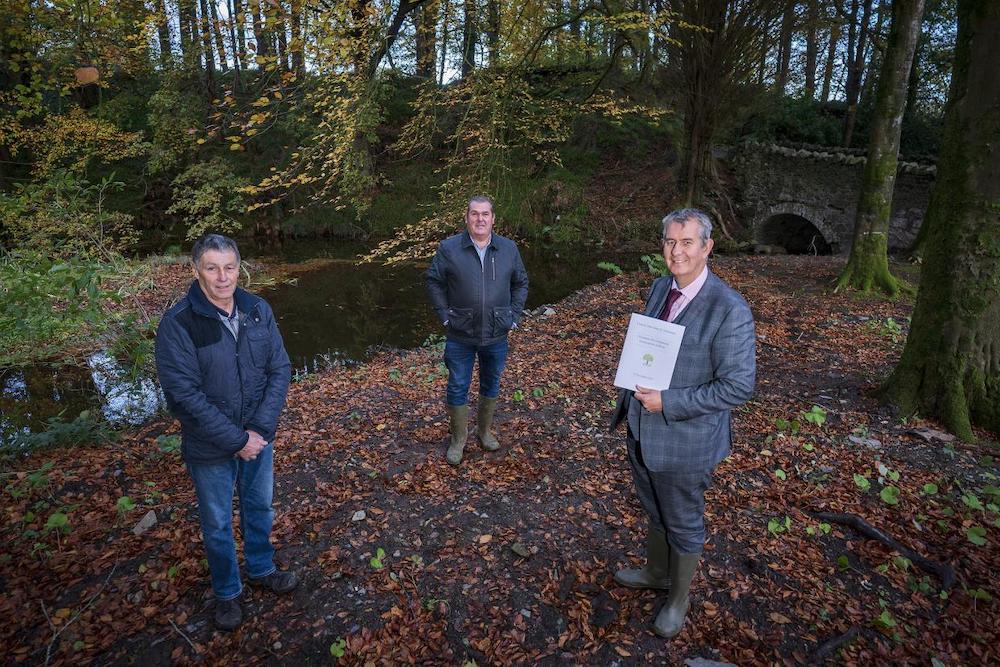 Rural Affairs Minister Edwin Poots has met with community groups in Glenanne and Bessbrook to discuss their plans to improve the local area this week.

The Minister began his visit in Glenanne Village, where he met with representatives from Glenanne Development Association to discuss the ‘Annie’s Glen Restoration Project’.

The project aims to redevelop a 40 acre woodland site known as The Glen, which had been part of the former linen factory in Glenanne. The Groups intention is to clear the existing pathways and provide new walkways for the local community to enjoy.

Welcoming the plans, Minster Poots said: “The Group are to be congratulated for having the foresight to acquire the land for the purposes intended and also for their attempts to improve the public perception of Glenanne.”

“The proposals have a strong environmental and rural theme, with emphasis on biodiversity, woodland walks and course fishing, it also contributes to the many healthy living and walking initiatives.”

Some of the redevelopment work has already been completed by local volunteers and the Group has embarked on a fund raising drive to help advance their proposals.

The Minister continued: “DAERA, through the Marginalised Minority Communities in Rural Border Areas Programme, will arrange for the Group to receive the necessary support to help them identify potential sources of funding”

Minister Poots then travelled to the village of Bessbrook where he met with the Bessbrook Institute Management Committee to discuss plans for the redevelopment of Bessbrook Town Hall.

The building was bought by the local Orange District in 1964 and has been run as a community hall since then by the Bessbrook Institute Management Committee, but has suffered in recent years through lack of funds and increased running costs.

It is hoped that plans to rebuild the nearby Harland Hall and incorporate it along with Bessbrook Town Hall via a new build (annex) into two working units will encourage the local community, particularly young people, to make use of a small complex within the village and encourage a cross community ethos.

Minister Poots congratulated the Committee on their plans saying: “I applaud them for having the foresight to acquire the building for the purposes intended and again my Department will arrange for the necessary support to assist them in identifying potential sources of funding to help them realise their plans.”