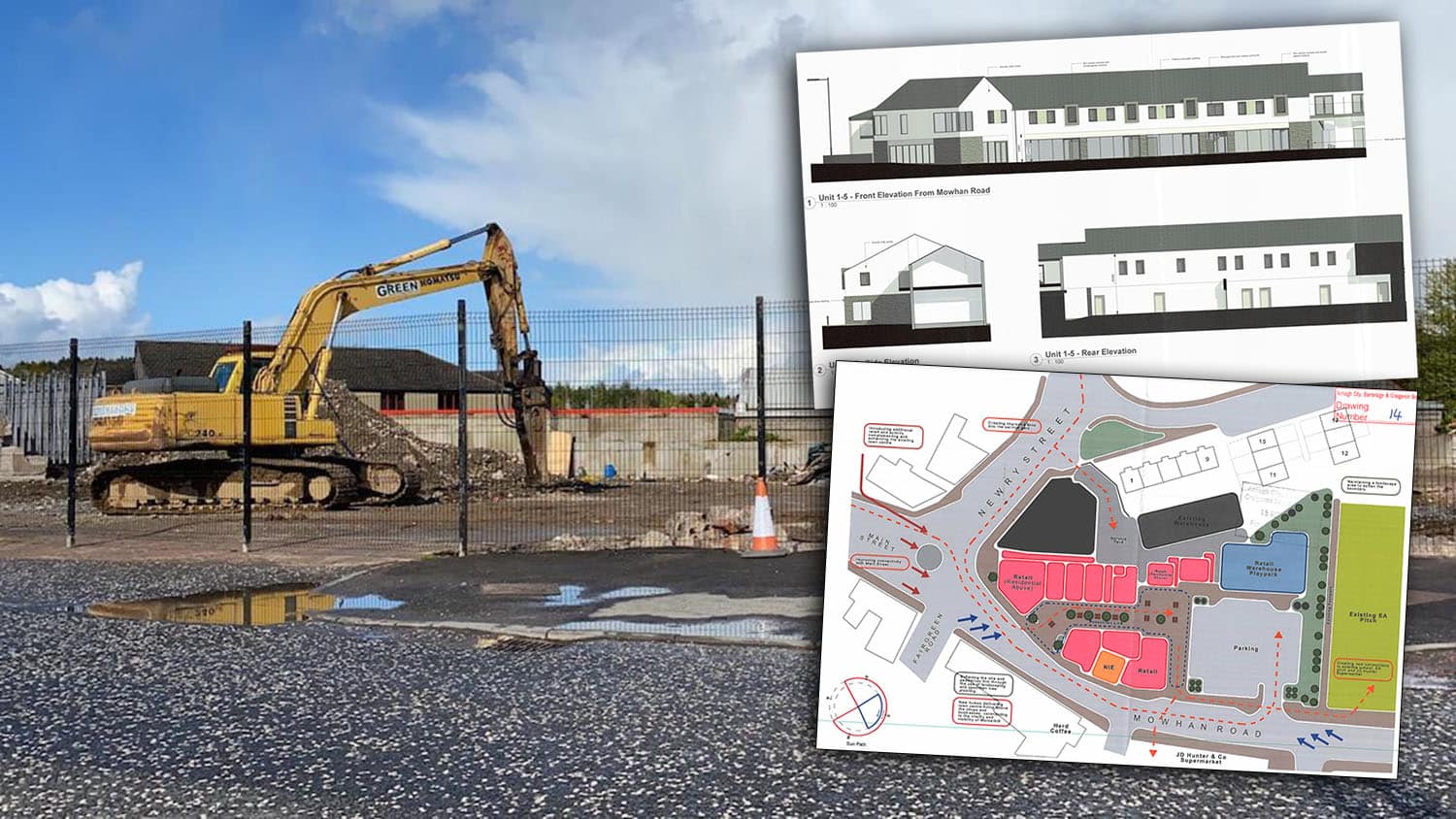 A mini shopping ‘village’ boasting 11 retail units – including an indoor play park and cafe – look set to be built in Markethill as part of a multi-million pound investment, Armagh I can exclusively reveal.

And the major development at Mowhan Road will be linked to the town centre by way of a new pedestrian walk-way, along with seating and other amenities for visitors.

A total of 11 apartments above the various shops also feature as part of comprehensive proposals drawn up for the site of the former Markethill mart and police station.

These firm plans for the now largely vacant site – which stretches to close to 28,000 sq ft – have now been lodged with Armagh City, Banbridge and Craigavon Borough Council for consideration.

It is expected that scores of jobs will be created, both during construction works and upon completion when units throw open their doors to the public.

It is not known at this stage if there are any intended tenants in mind, but two of the 11 units have been listed on papers as ‘flexible space units’, as it is the aim that these would be occupied by an indoor play park – or failing that retail warehouse – in the biggest unit, and “cafe or retail” at unit six.

News of these latest developments comes after outline planning approval was finally recommended for approval for the redevelopment of the site – opposite Hunter’s Supermarket in the town – last autumn.

And it is the former owners of J D Hunter’s supermarket – Richard Hunter and Alison Strong – who had brought forward the proposals.

These first emerged in October 2019.

The proposals on behalf of RHAS Properties outlined ambitions to transform the now derelict site into an all-encompassing retail/commercial space, with a café on the main Mowhan Road.

The site takes in the area covered by the former police station and livestock sales yard in the centre of Markethill.

There had been a few snags along the way before outline approval was granted.

And now more meat has been put on the bones with full details of what exactly is being planned.

The site, in the application, is now described as “mostly vacant land”. The application, now seeking full approval to build, adds: “The site has recently been cleared but was previously in use as a livestock market which has been vacant since October 2013, and a police station.

“Part of the site to the north east has a retail unit and warehouse.”

“Partial demolition” of the existing warehouse will be required to proceed with what truly is a transformational plan, not just for the site but the town of Markethill as a whole.

The overall earmarked location relates to lands from numbers 2 to 8 Mowhan Road.

A supporting planning statement reveals that the planned works would involve the demolition of part of a warehouse building fronting on to Newry Street/The Square to create an extended service yard for the warehouse and the planned retail units.

The 11 “high quality apartments” comprise four one-bedroom properties and seven two-bedroom, with a communal refuse space situated to the rear of the retail units at ground floor level.

There would be 36 car parking spaces as well as four disabled bays for the new retail development, as well as on-street parking too. In addition, there is provision for cyclists – 14 cycle spaces for residents of the apartments, and 24 for visitors to the commercial facilities. These will be located at the entrance to the development from the town centre and fronting the new retail units 9 and 10. There would also be a pedestrian link through the centre of the development, “linking the car parking to the town centre with outdoor seating and landscaping”.

According to the planning statement, the new retail units will “complement and enhance the provision in the town centre”, while the apartments overhead will be “contributing to the vitality and viability of Markethill”.

It says it “seeks to regenerate the vacant town centre site” and adds: “The application proposes a mixture of uses, namely residential, retail, cafe, a flexible space for either a retail warehouse or an indoor play park, a public walkway and associated parking on the vacant site”.

It reveals that the pedestrian link through the development and out to the main town centre provides close to 9,000 sq ft of open space, and adds: “Seating and landscaping will be provided to visually enhance the area and encourage visitors.”

Two of the apartments will include balconies overlooking the pedestrian walkway.

And landscaping – including planting – is also proposed around the boundary of the overall site.

It concludes: “The redevelopment of this vacant site will provide a high quality development in the town centre.”

The proposals will now be publicly advertised shortly with a recommendation from planning officials expected next year.