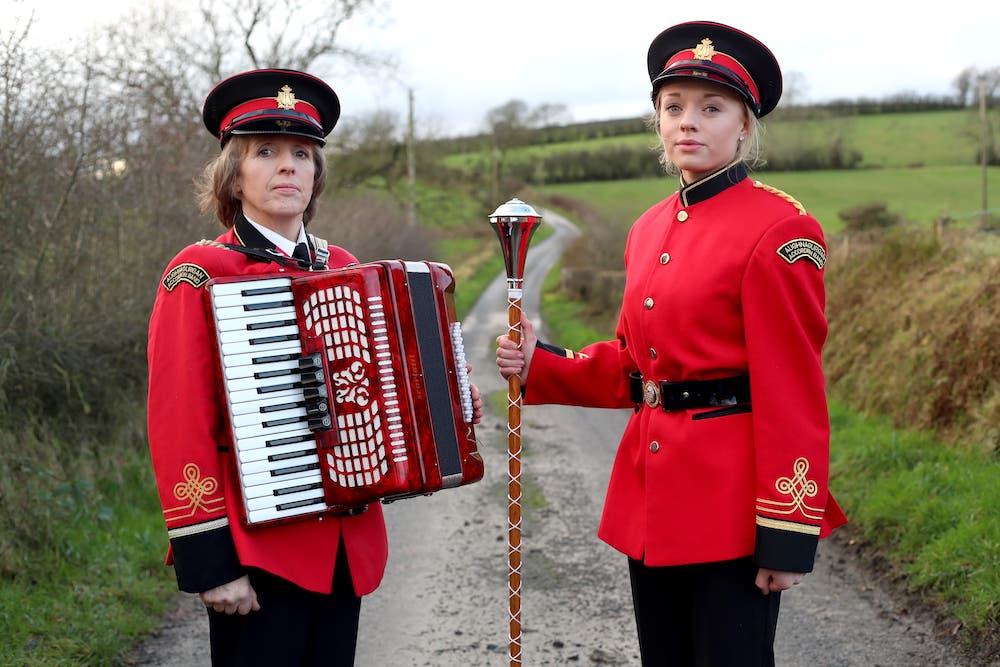 The Band returns for a second series on BBC One Northern Ireland on Wednesday, January 5, at 10.35pm, following the highs and lows of rural families that live together and band together.

The three-part series, supported by the Ulster-Scots Broadcast Fund, explores the remarkable people, young and old, who dedicate so much of their lives to their band, culture and community.

Through their love of pipe, flute, accordion and brass band music – this intimate series reflects a vibrant community with a shared musical heritage that is passed down from generation to generation.

Winifred Rainey from Newtownhamilton, who has been a member of Aughnagurgan Accordion Band for more than forty years. With more than fifteen members of her extended family in the band, it is her youngest daughter Alex, an agricultural student, who takes the reins as Drum Major.

Despite early morning starts and plenty of silage to draw, this busy farming family always finds time for the band.

Winifred said: “We didn’t get out very much when we were young, so I joined the local band to get out to parades and out and about to things. It’s where I met my husband Brian. I just couldn’t imagine not being in a band.” There’s also 21-year-old engineering student Brianna McMullen from Ballygowan is not your typical girl in a band.

As one of only a couple of women known to beat the bass drum in Northern Ireland, Brianna challenges the stereotypes of banding, attracting attention from onlookers wherever she goes. Brianna is passionate about her identity and her band family – Ballygowan Pipe Band. She’s also a dab hand at welding and clay pigeon shooting.

Brianna said: “People think you just go to the Twelfth of July, but for me, playing the big drum means a lot more. I take great pride in my heritage and culture.”

Returning from series one is the Lutton family, whose musicianship is demonstrated once again when eldest son Craig, a professional percussionist, returns home to Randalstown to join with his family and his local band, Kellswater Flute, for a busy Twelfth. Craig said: “Drumming is amazing, I can hear the pulse in my heart. It’s just in the blood and I hope that passion never dies, because I’m living the dream.”

In the following two episodes, we meet the McElhinney family from South Donegal as they prepare for a smaller Rossnowlagh Twelfth than usual and the Graham family from Rathfriland, as preparations for the Ardarragh Accordion Band’s annual Tractor Run get underway.

The Band is a DoubleBand Films production for BBC Northern Ireland in association with the Ulster-Scots Broadcast Fund. The series was produced by Sharon Whittaker and directed by Ben O’Loan. Engineering student Brianna McMullen from Ballygowan, Co. Down, is one of only a few female bass drummers in the band scene in Northern Ireland. Half Jamaican and half Ulster-Scots, Brianna, her dad Mark, mum Tanya and younger sister Samera are passionate about their identity, culture and faith.

Craig Lutton, from Randalstown, Co. Antrim, is a professional musician who performs all over the world. Despite a busy schedule Craig always finds the time to come home during marching season to play alongside his dad Gregory and younger sister Rachel in Kellswater Flute Band.

Agricultural student Alex Rainey, from Newtownhamilton, Co. Armagh, is Drum Major of Aughnagurgan Accordion, a role that is both a passion and family affair as fifteen members of her extended family play in the band, a tradition set by her mother Winifred – a member for more than 40 years.

Brothers Stephen and Scott McElhinney are active members of the Ulster-Scots community in south Donegal, with Stephen the driving force behind Moyne Pipe Band and Scott’s eldest daughter Chloe (21) responsible for the small highland dance school in the area.

Chris Wright, from Castlederg, Co. Tyrone, is the conductor of Churchill Flute Band in Londonderry – the longest established marching band in Ireland. He and his wife Marcie, a music teacher, spend their weekdays working in music and their weekends at their caravan in Benone.

David Bingham is a 28-year-old assistant Presbyterian minister in Magherafelt, who makes time for his other calling – Hamiltonsbawn Silver Band – which he plays in alongside his father David Snr, his sister, Ruth, and younger brother James from Markethill, Co. Armagh.

Andrew McConnell, from Annalong, Co. Down, along with his 21-year-old son Christopher make fishing boats at Kilkeel harbour. Andrew has been a volunteer for the RNLI for more than 32 years, with youngest son Christopher recently joining the crew. Andrew is the third generation of his family to play bass drum for Ballyvea Flute Band and hopes one of his sons will one day become the fourth.

31-year-old Allison, a cleaner from Rathfriland, Co. Down, is embarking on her first year as band mistress of Ardarragh Accordion Band. After a difficult 18-months for her wider family, she is keen to ensure the band looks good, sounds good and continues to make a positive contribution to this rural community.

The Brodison family from Magheramorne, Co. Antrim, live for their band – Ballyduff Silver. All five members – father Nigel, mum Rachel, and sons Sam, John and Michael – are passionate about brass music, but with career opportunities further afield looming for the younger family members, could this be their last year of banding together as a family?