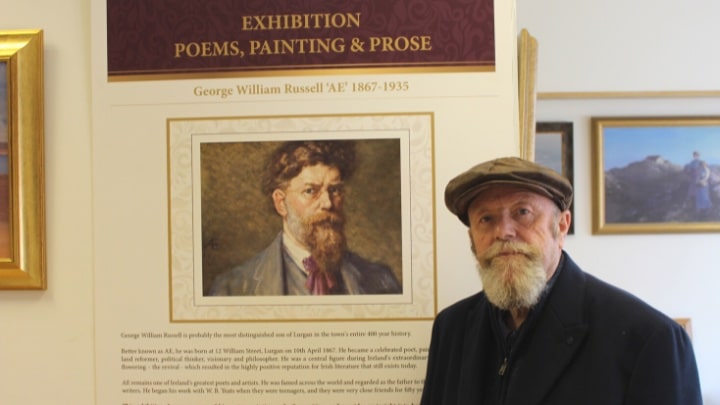 Jim Conway, chair of the AE Russell Appreciation Society - Lurgan, at the exhibition in William Street, Lurgan ahead of its opening

The sixth annual festival celebrating the life of one of Ireland’s greatest figures, Lurgan-born George William Russell, started this week.

It’s returning to venues in Lurgan for the first time since 2019 – the pandemic resulted in no festival in 2020 before a successful series of events online last year.

The festival opened with the launch of an exhibition – which will run throughout the week – showcasing his art and poetry, in William Street, where Russell was born.

He later moved to Dublin. He died in 1935, and the funeral procession in Dublin was more than a mile long.
Russell – also known as AE – was a polymath; a poet, artist, editor and mystic among other things.
He was one of the early leaders of the co-operative movement in Ireland and a forceful voice during the Dublin Lockout of 1913.

He influenced global figures such as Gandhi and Franklin D Roosevelt.

The festival will also see talks in the Jethro Centre (Wednesday, April 6, 7.30pm) and the community centre in Kilwilkie (Thursday, April 7, 12.45pm), an open mic night in the Vintage bar (Thursday, April 7, 8pm), and a guided walking tour of sites linked to Russell (Saturday April 9, 10am and Sunday, April 10, 2.30pm).

Jim Conway, chair of the AE Russell Appreciation Society – Lurgan, the group behind the festival, said: “AE Russell was a remarkable man. One of the greatest men Ireland ever had. We are trying to bring his memory to the people – and give it greater attention.

“The people of Lurgan will be astonished to see the art of AE, his poetry and the significance of the man, not only nationally, but internationally. He was a great influence on Gandhi, on Roosevelt, and of course, there is the Mary Poppins connection.

“He was a great influence on Pamela Travers, who wrote Marry Poppins. In fact, she got her ideas for Mary Poppins from AE Russell.”

He added: “He encouraged people. He was known as the father of three generations of Ireland’s greatest writers.

“The festival will be great fun and people will get a lot out of it. We hope everyone will enjoy it.”

Irish historian Brian McKernan added: “AE was a unifying figure and the voice of reason during Ireland’s most turbulent social and political period from the 1890s to the 1930s. Although he was also an internationally celebrated writer, poet and painter, he was Ireland’s intellectual powerhouse at this time.

“AE’s total opposition to conflict and division, coupled with his ability to problem-solve and his service of others, makes AE’s life and legacy something the whole world can embrace.”

The festival runs until April 10 – AE’s birthday. All events are free.