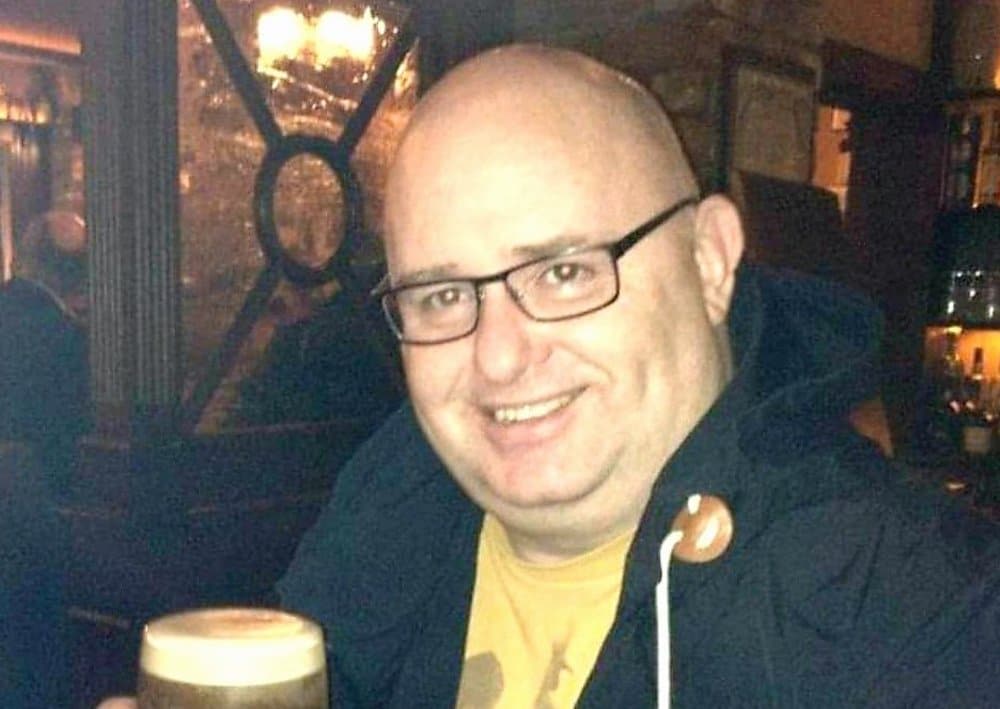 A sense of shock and sadness has emanated following the sudden passing of talented musician and trade unionist, Mel Corry.

Tributes, from around the world, have been paid to a friend, colleague and “an exemplar of the incorruptible working class”.

Mel, a former textile worker from Lurgan, had worked closely with workers since the late 1990s before he took up a role with Tradesmark in Belfast – a social justice co-operative dedicated to tackling sectarianism and inequality – in 2008.

Mel had also played an active part in the trade union movement as a Unite member and delegate to Craigavon Trades’ Council.

And it was those two bodies who led tributes to a great man.

“Our hearts are breaking, our friend and comrade Mel Corry, has passed away after a battle with Covid,” said a Tradesmark spokesperson.

“Mel was a committed trade unionist and communist and remains an exemplar of the incorruptible working class.
Gone too soon, comrade.

“Our love and thoughts are with his wife Fiona, his boys Sean and Michael, his mother, sisters and grand daughter Nancy.”

Craigavon Trades Council said they were “reeling at the news of the passing of former President and stalwart member Mel Corry”.

“Mel was a committed trade unionist and communist, an educator and class warrior working in the service of his class. He worked tirelessly on anti-sectarianism projects and provided help and employment rights advice to many, many people. Our thoughts are with his wife Fiona, his sons Sean and Michael , his Mother sisters and grand daughter Nancy. He will be greatly missed by all in the Trade Union Movement.”

Friend and colleague, Brian Forbes, posting following the news, said: “Anyone who had the pleasure of meeting Mel and who were privileged to spend some time in his company will feel this deep loss tonight.”

If Mel wasn’t devoting time to his work and family, he was working on his music – as it too played a huge part in his life.

And one of those friends in the music world was Tony O’Brien, who commented: “Today, I lost a friend of 30 years with the death of Mel Corry. Mel passed away at 5.30pm and has left a great void in the Irish Bluegrass Family.

“I met Mel at the 1st Athy Bluegrass Festival in 1991 and we were firm friends ever since. Mel was a member of the 1st Woodbine line-up in 2002 and even though he was only in for one year he filled in with the band on many occasions.

“Mel shaped a lot of bands in Ireland this past 30 years, Seldom Herd, The Dusty Millers, The Tennessee Hennessee and King Blue.

“Mel was at the end of my phone any time I needed him to play or for some advice. A great banjo player and vocalist; he was at the heart of everything Bluegrass in Ireland over that past 30 years.

“To me, Mel and a small core of Bluegrass musicians were the leaders of Bluegrass Ireland and everyone else were the supporting cast. He was a great friend to the Athy Bluegrass Festival and I’ll miss him so much. I was so looking forward to an end to this Covid so we could all meet up for a big session but it has robbed us of that so if and when it happens now there will be a huge hole in the session with the loss of Mel.

“As much as I and every Bluegrass musician and fan will miss Mel it is nothing to the loss his wife Fiona, sons Sean & Michael and Grand-daughter Nancy will feel, my heart is with them at this the saddest time in their lives. RIP Mel old friend.”

Paul Hull said words cannot describe how he felt at the news.

“When I first heard him play banjo all those years ago, playing the music I loved so much, I knew we would be friends,” Paul said. “I have some great memories to keep. I am honoured to have known him, to have played with him and over the last few years I was blessed to record songs for him.

“He was playing, writing and singing so well last time he was here with me. It was always a pleasure – an honour. I’ll miss ya buddy. Go rest high on that mountain. Il see you again. Thinking of Fiona and the boys and all his family.”

A tribute on the music website Uncut Grass described Mel as “a pillar of the bluegrass community in this island for a generation, at the same time as deserving – as much as ever anyone did – the title of ‘activist’ on a wider stage.

And the tributes came in from the US.

Musician, Rick Faris, the lead singer of Special Consesus in kansas, said he was “completely gutted”.

“It’s how I feel and it’s a boxing phrase a dear friend in Ireland taught me along with so many other things,” he continued. “He inspired me to be more active in my community, learn everything you can and pay attention to everything around me. He was a learned fellow and expected it and encouraged it in others.

“He cared about people who were disadvantaged in his community and worked hard to give them a hand up. You were first class Mel Corry. Thank you for your friendship. He was a huge influence on someone he only met in person a total of about 15 times over 10 years. Speaks to his character. Rest well my friend. You’ve been a credit to your family name.”

A “devastated” Clem O’Brien recalled how he and Mel had been friends since they met at the first Athy Bluegrass Festival.

“I will remember him as a great soldier for Bluegrass music, superb banjo player and vocalist and as such, his passing leaves a void in the Irish Bluegrass scene that can never truly be filled.

“I have been remembering the great craic and picking sessions at all the festivals which sprung up around Ireland in the early 1990’s promoting Bluegrass, my trips up north to guest, many times, with Mel’s various bands, the times we bunked together – often spending half the night making musical plans and the quiet head to head discussions we would have about the music, often in the corner of some venue after soundcheck. My deepest condolences go out to Fiona and the boys. Rest well brother, you will be missed.”