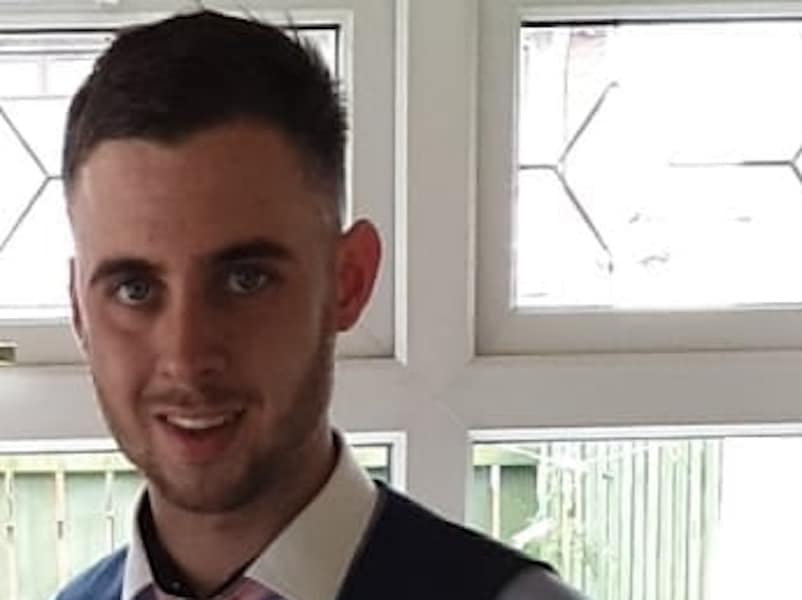 The priest at the funeral of a young Lurgan man has urged anyone who is feeling troubled to “talk” and let other people know they are “in a bad place” and need help.

Fr Colum Wright was speaking at the Requiem Mass for Caolán Doyle in St Peter’s Church this morning (Monday).

The popular mechanic, who had four young children, died suddenly on Friday.

Symbols of his life were placed on the altar and included family photographs, the Doyle family crest, his Mercedes-Benz hat and his Celtic football top.

“All of us hit the wall at some time in our lives.. life doesn’t go in a way where everything is easy,”  Fr Wright told mourners.

“There are times when we think, and will think, that our hearts and heads are literally going to burst. That is nothing to be ashamed about admitting when we feel that way.

“We used to think mental health problems were for old people. They’re not, they’re for every type of person and every day in life mental health issues affect children, young people, middle-aged people and senior citizens.

“We are not on our own, we are never on our own, there is always someone out there who has been there before us.”

Fr Wright said there are many testimonials in print and online from people who have experienced mental illness.

“Big boys do cry, sometimes a lot, and old men cry too and if we are in the company of anyone who’s crying, what we should do is put our arms around them and say, ‘let that out, and to admit that we have cried too’,”  he added.

He recalled, as a young boy, a teacher at school telling them the story of his alcoholism.

“By telling us that, he enabled us by his testimony to face up to our problems, he enabled us and gave us the confidence to be honest about our struggles. We too should enable those around us,” he said.

Describing Caolán as a great partner, father, son, brother and friend, and acknowledging the heartbreak of his family, Fr Wright said: “If Caolán had just got over that hurdle he was experiencing at that time, his family and friends would have done anything for him, there was nothing they would not have done.”

The priest told the congregation how, five years ago, he had a brain tumour removed and afterwards he suffered from “horrific” depression.

And he added that a priest who he attended for counselling told him his greatest gift was that he talked, that he put his problems out there.

Fr Wright also appealed directly to those in the church to support the  family in the days ahead.

In a tribute, childhood friend Ryan described Caolán as the “nicest man I ever knew” and said his smile would have “lit up the darkest of rooms”.

He said Asheigh was the “love of his life” and his children were his “pride and joy”.

“You were a brother to us all and a best friend. Thank you for the memories, the late night chats and for helping us and not even realising it, but more importantly thank you for being you,” he said.

His father Declan passed away in 2018.