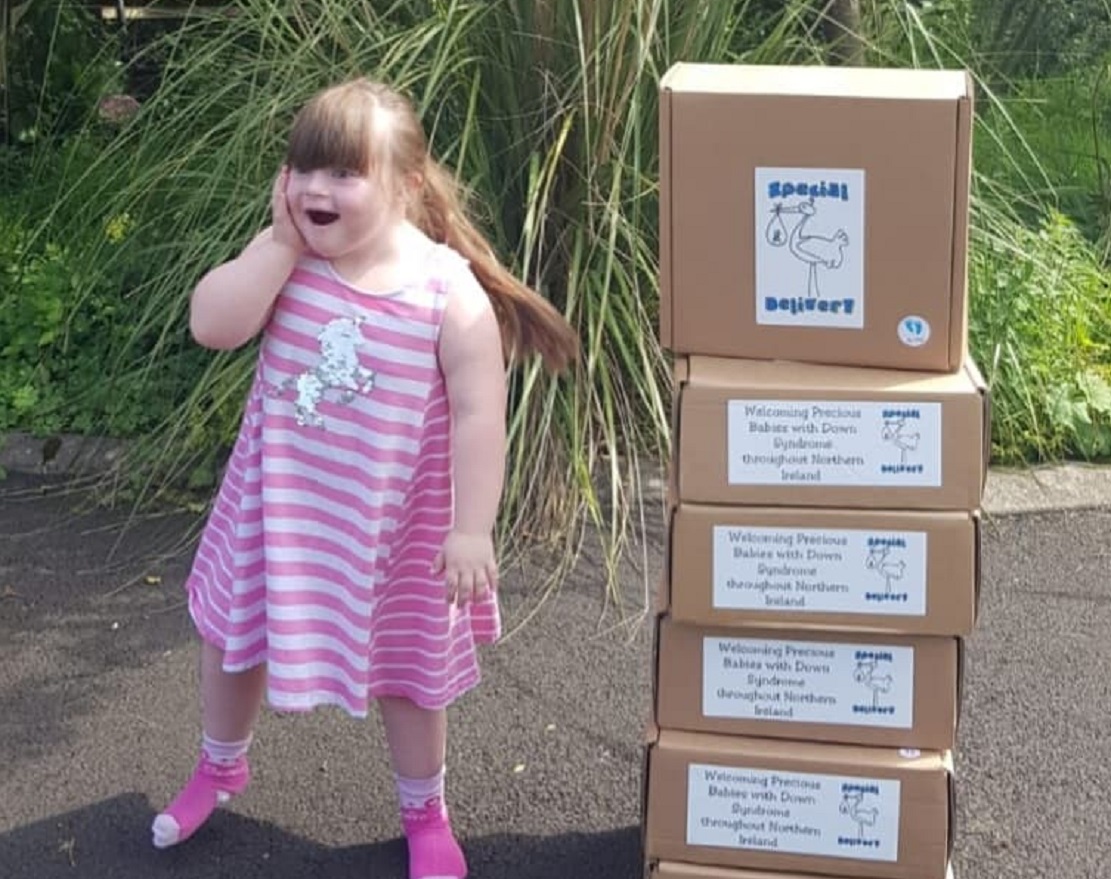 Aoife Cushenan (8) helps prepare some of the Special Delivery boxes

A mum whose baby was born with Down’s syndrome has said a box of gifts from a charity set up for new mums like her was “just so lovely” and a real help when she needed it.

Nicola Massey, from Lurgan, received the surprise box from Special Delivery NI when she was in hospital with Eli, now aged eight months.

The charity was set up by Ballymena woman Clare Cushenan whose daughter Aoife was born with the condition in 2013.

Her aim is to celebrate special children like Aoife and Eli and reassure new mums that life can be positive and full of hope and joy.

Clare, who formed the charity in March 2020 to coincide with Down Syndrome Awareness Day, has launched an online Christmas fundraising appeal to enable her to keep supplying the gift boxes.

Since its inception, the charity has given over 100 gift baskets to mums in all of Northern Ireland’s maternity units.

They contain items such as handmade blankets, hats and cardigans, baby clothes and comforters as well as scented candles and toiletries for the mums and a photo voucher.

They also contain the Wouldn’t Change A Thing and #NobodyToldMe books, full of positive information about Down’s syndrome and aimed at changing outdated perceptions. Clare Cushenan delivering some of the gift boxes

Clare and husband Owen have two older children, Michael and Maria, and weren’t aware Aoife had the condition until she was born.

Looking back on the early days of Aoife’s life, Clare says she regrets the time she spent worrying about the Down’s diagnosis, rather than celebrating the birth of her beautiful baby.

“We rarely think about Down’s syndrome now – it’s just something Aoife has. Rather than it being negative, it’s quite the opposite,” she said.

“Aoife has taught us more than we’ll ever teach her. She has made us not only better parents but also better people.

“I just want to make sure that every baby born in Northern Ireland is celebrated, that mums feel reassured and that they enjoy their wonderful, new child and don’t waste those precious first days worrying.” Nicola knew from her 20-week scan that Eli had a rare health condition – long gap oesophagal atresia – which leaves him unable to swallow and means he has to be fed through a tube.

While she was prepared for that, she didn’t know until the birth that Eli also had Down’s syndrome.

“It was a wee surpise and I didn’t know much about Down’s syndrome before I had Eli,” she said.

“There were beautiful wee things in the boxes, loads of wee baby things  you need as well as absolutely gorgeous books. I read the stories and they were so positive,” said Nicola.

“I thought ‘this is a new world but it’s not what people make it out to be’.

“Clare had also put in a letter with her email address and I had emailed her to thank her. She sent me her mobile number, and said she was there if I needed to talk to her.

Anyone wishing to donate to The Special Delivery NI Christmas appeal can do so through the GoFundMe link here.