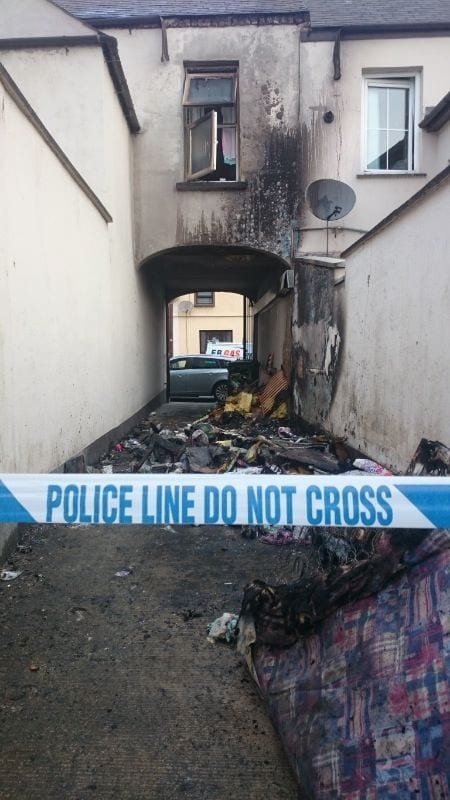 This picture shows the lucky escape a child had after a fire was started under their bedroom during the early hours of this morning (Friday).

The PSNI in Craigavon posted the image and praised the Northern Ireland Fire and Rescue Service for the “cracking job” they had done.

The fire was set at a house on Victoria Street in Lurgan and, according to police, the first crews on the scene had been of the opinion that the whole row could have gone up in flames had it not been for Fire Service.

Police received a report of the fire at at 5.13am. It is believed that a rubbish pile may have been set alight.

The PSNI, posting this picture of the aftermath of the arson attack on Facebook, said: “That could have been so much worse.”

And they added: “The room which has part of the under floor missing and the scorch marks up to the window is a child’s bedroom.

“There is no doubt this was deliberate, started in an alleyway between houses, and we are very keen to get speaking to a male described as wearing blue jeans and a dark jacket, possibly holding a carryout, in the area of William Street and Victoria Street around 5am this morning.

“Thankfully, nobody was hurt during this incident. Neighbours looked out for each other and woke pretty much the whole street to make sure everyone was safe!

“Our NIFRS colleagues did an epic job making sure it didn’t spread further. Without doubt we would be talking about serious injuries or worse if it weren’t for the actions of these folk.”