End of an era as Malachy closes menswear shop after 57 years as a tailor, man and boy

'I'm still doing a bit of clearing up here. I don't think it has sunk in yet. It probably will when I turn the key in the lock for the final time' 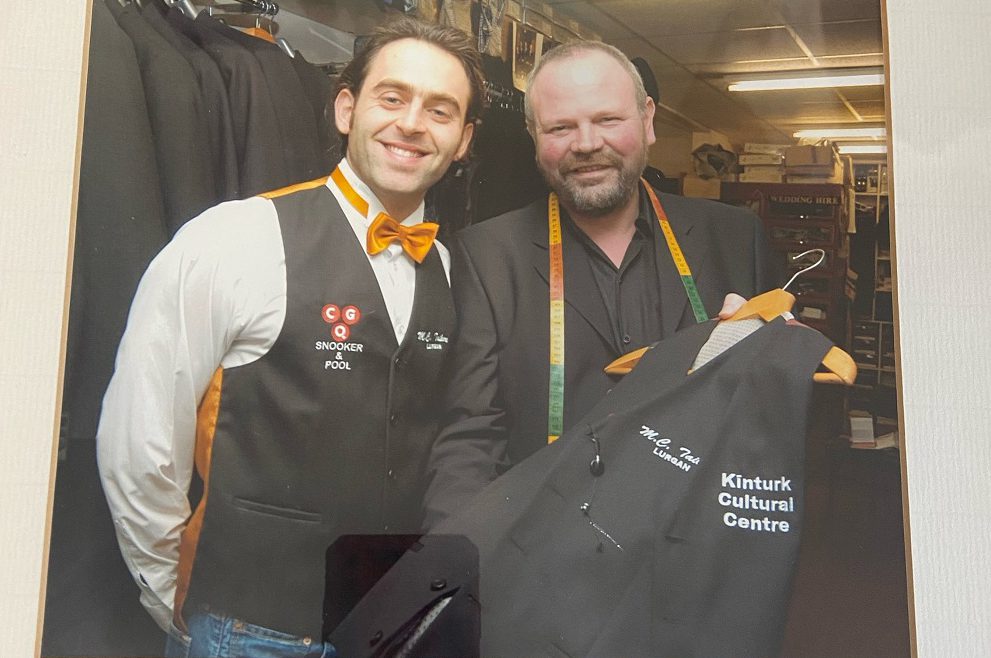 A tailor who started sewing when he was aged just 13 has finally hung up his tape measure after 57 years in the profession.

Malachy Cumberton served his final customer at his shop in William Street, Lurgan, on Saturday.

He first opened MC Menswear in Market Street more than 35 years ago, having learnt his trade as a teenager at McQuillan’s Tailoring in Portadown.

Over the years, Malachy has amassed some great memories, made good friends and sewn for some famous customers including waistcoats for professional snooker players Ronnie O’Sullivan and Mark Allen.

He also recalls the sight of two finished, hand-made suits hanging side by side – one was for well-known Lurgan man, the late Patsy Coleman, who was well over 7ft tall, and the other for the smallest man in Ireland at the time, who, Malachy says, was just 3ft 6.

“It was an unusual sight but we never thought of taking a photo at the time,” he said.

Malachy, who recently celebrated his 7oth birthday, was just 13 when he started going to Brendan McQuillan’s after school to help out.

“I did a bit of cleaning up and ran some messages and then I started to sew,” he said. ” It took me about a year learning to sew on the machine and by hand and then the next two years I was doing alterations and pattern cutting. He has vivid memories of sewing cross-legged on the bench, the common way to work then.

“You would have got up on the bench and sat cross-legged. There was a thing called a donkey, wooden with a metal frame, that you would have done all your sewing work on, and that used to be pressed down on your legs so your legs were flat,” he explained.

“It had a broader piece for the jacket and one slimmer underneath for the trousers. It was supposed to be the best posture for your back. It was painful at the start, but then I got used to it. I was young then and supple!”

Malachy comes from a tailoring family. His grandparents, Matt and Anne, were a tailor and tailoress in West Street, Portadown, for many years and employed about 10 people in their business, MJ Cumberton Tailors and Outfitters.

Said Malachy: “The funny thing was, McQuillan’s Tailoring was run from the same house in West Street where my grandfather and grandmother had their business.

“And this business that I am in now in William Street was a tailor’s too.”

At the age of 15, Malachy decided to leave school and pursue his love of fashion. The teacher at St Columba’s must have heard I was working in the tailor’s and so he asked me to bring in the Reefer jacket I had made and do a wee bit of modelling before I left!” he said.

Malachy completed a five-year apprenticeship with Brendan McQuillan followed by a year in Belfast cutting and making patterns.

With the advent of the Troubles, he headed to Portsmouth to work, followed by a year off travelling around Europe, before returning to McQuillan’s and finally setting up his own business.

“I tossed a coin when I was leaving Brendan’s as to whether it was going to be Lurgan or Armagh, and it turned out to be Lurgan,” he said.

Tailoring was big business in the days before ready-made suit, with around 16 tailors in Lurgan at one point and four in Portadown. There were also what were known as ‘tramp tailors’, who worked a week or two in a town and then moved on somewhere else.

“But if they were no good, they didn’t get any!”

The father-of-four recalls his career with fondness. One of his most memorable jobs was for a wedding.

“The bride-to-be and her mother came into the shop one Friday evening when it was about to close at 5.20pm to lift the wedding suits,” he said.

“They said the wedding was  the next day but when I looked in the book there was nothing there, so she girl got on the phone to her fiancé who was in the car going up to Larne to collect the best man and another man.”

It turned out the groomsman had  “never got around” to organising a suit.

“That day a box of waistcoats and accessories had come in for a wedding. It was an unusual colour and she pulled out a piece of material and it was a perfect match. The fellas arrived back at 9pm and I had them fitted up and sorted out by 10, and that was that.

“It gives you a bit of pleasure when you make a suit for somebody. As the ready-mades got cheaper, it got harder,” he said. Busy at work, cutting out a pattern

“You could sell a suit in 20 minutes or half an hour but to make a suit took four or five days… But those suits would have lasted for ever.

“We closed on Saturday but I’m still doing a bit of clearing up here. I don’t think it has sunk in yet. It probably will when I turn the key in the lock for the final time.”

Malachy, meanwhile, is looking forward to pursuing his hobbies of horse-racing, fly-fishing and taking the odd holiday.