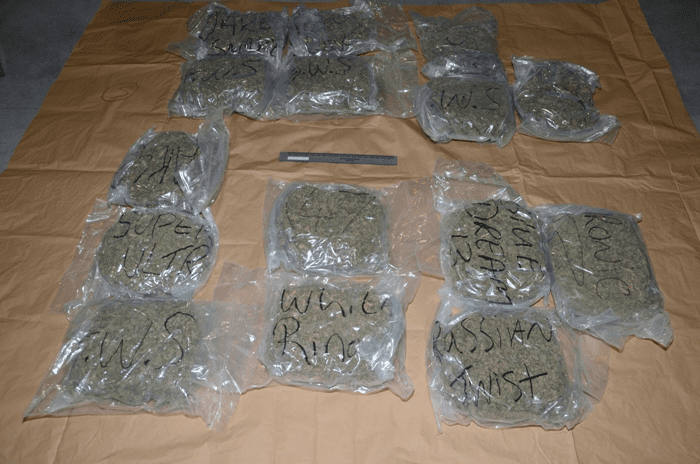 The drugs seized during the search of a vehicle in Co Armagh in April 2016.

Four men involved in a cross-border drugs gang have been jailed after appearing before Craigavon Crown Court today (Tuesday).

Their appearance followed the discovery of herbal cannabis – with an estimated street value of £300,000 – in a car in Co Armagh almost two years ago.

The four accused – from Co Armagh, Co Tyrone and two from Co Donegal – were handed prison sentences of varying lengths.

Before the court were Kieran Austin (61) from Lurgan, Darren Donnelly (33) of Sixmilecross, Omagh, and Desmond Enfield (34) of Ramelton, Co Donegal. All had previously pleaded guilty to conspiracy to supply Class B controlled drugs.

Enfield was handed a two-year sentence – 12 months to be served in prison and 12 months on licence – while a Forfeiture Order was issued for an Audi vehicle.

Boyce was given 16 months – half to be served in prison and half on licence, while another Forfeiture Order was issued for a Ford vehicle.

Austin was handed a 16-month and Donnelly Donnelly 12 months. Each will serve half their sentences in prison and half on licence.

Today’s sentencing brings to a close a proactive joint investigation between the PSNI’s Organised Crime Unit and An Garda Siochana, into the importation and supply of controlled drugs.

“The three male occupants – Desmond Enfield, Seamus Boyce and Kieran Austin – were arrested at the scene as they were caught in the act of supplying £300k of herbal cannabis.

“Further enquiries by the PSNI’s Organised Crime Unit resulted in significant evidence which proved the involvement of HGV driver Darren Donnelly in this drugs ganga.

“All four have now been sentenced for their role in the supply of controlled drugs by an organised crime gang operating in Derry/Londonderry and County Donegal areas.”

DI McClure acknowledged the assistance provided by An Garda Siochana who worked closely with the PSNI in this cross-border proactive investigation.

He added: “This organised crime gang were supplying large quantities of controlled drugs into the Derry/Londonderry and Donegal areas which had the potential to cause significant harm.

“We will continue in our efforts to make Northern Ireland a safer place to live and work by proactively investigating and arresting people involved in serious criminality. The supply of controlled drugs by gangs is the cause of significant harm in our communities.

“Those who involve themselves in such criminality should expect to end up in a prison cell. There is no place in our society for these individuals who are only interested in making money for their own personal gain at the expense of others.

“They do not care that their actions could end up killing people. Drugs not only affect the person taking them, their families and the community also suffer.

“I would ask anyone who has any information about the use or supply of illegal drugs to contact police on the non-emergency number 101.