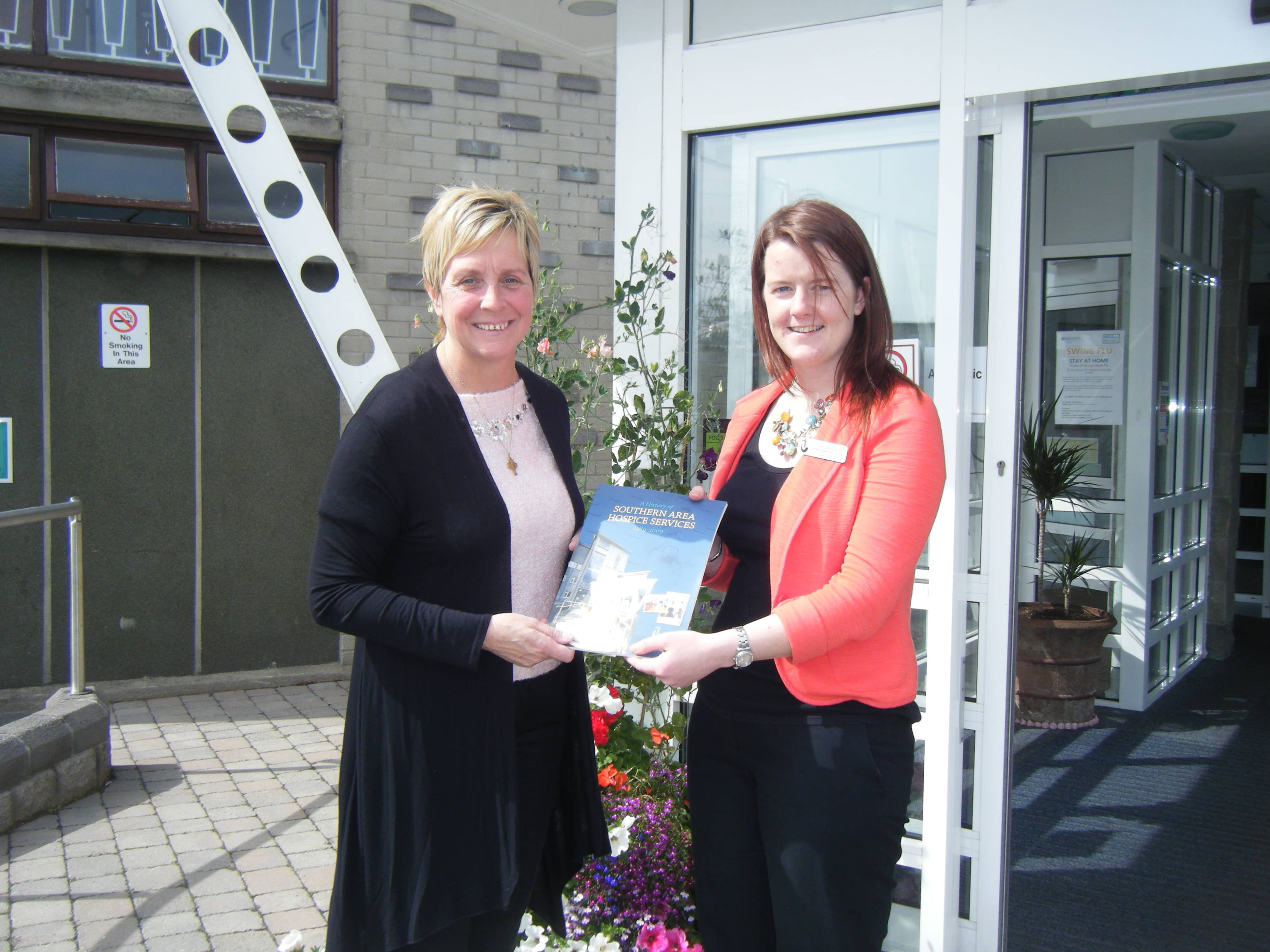 Southern Area Hospice Services were delighted to welcome the Lord Mayor of Armagh, Cathy Rafferty, to the Hospice for an official visit last week.

The Lord Mayor has selected Southern Area Hospice Services as one of two nominated charities to support during her term in office and so paid a visit to the Hospice so that she could see first-hand the facilities which the Hospice provides and to learn more about the wide range of services which they offer to people throughout the entire Southern Health Trust area.

The Lord Mayor, as Armagh I reported, will also bravely face the Ice Bucket Challenge at the Bramley Apple Festival at the Shambles Yard, at 3pm this Saturday, September 6, with proceeds to the Hospice and her other charity for the year, Armagh Acorns Autism Centre.

Lord Mayor Rafferty was welcomed to the Hospice by Anne Mac Oscar, the newly appointed Regional Marketing Officer for Armagh and Dungannon, and was given a tour of the facilities by Anne and the Director of Nursing at the Hospice, Mrs Carmel Campbell. Following her tour of the building, during which she met a large number of staff, patients and volunteers, the Lord Mayor met with members of the senior management team.

Anne Mac Oscar, Regional Marketing Officer for Southern Area Hospice Services in Armagh and Dungannon said, “We are delighted to have been selected as one of Lord Mayor Cathy Rafferty’s nominated charities for the year. It was great to be able to welcome her to the Hospice today so that she got the opportunity to see how the money which she raises over the coming months will be used to benefit local people through the continued provision of our wide range of services.”

Anne continued “Southern Area Hospice Services has a fundraising target of £2.3 million for 2014 – the support of the local community is so important in helping us to reach our target. We are very much looking forward to working with the Lord Mayor and her team over the coming months.”

The Lord Mayor is in the process of organising various events and campaigns to raise funds for both the Hospice and her other chosen charity, Acorns for Autism.

Lord Mayor Cathy Rafferty commented, “I am determined to raise as much money as possible for Southern Area Hospice Services to help them to continue to provide this tremendous and much-needed service to the people in our local community.”

Southern Area Hospice Services is a charity providing care free of charge to people living in the Southern Health Trust area with Cancer and other life-limiting illnesses, such as Multiple Sclerosis, Motor Neurone Disease, HIV and Aids.

As well as an inpatient unit, Southern Area Hospice Services also offers a large number of other services, including Day Hospice Units in Newry and in the South Tyrone Hospital in Dungannon, outpatient clinics in Dungannon, Craigavon and Newry, a Palliative Care Team in Daisy Hill and Craigavon Area Hospitals, a Homecare Nurse in the Armagh and Dungannon districts, bereavement support services and the Donaldson Counselling and Therapy Centre.

Southern Area Hospice Services has a fundraising target of £2.3 million for 2014 to enable them to continue to provide their current level of services, this figure equates to £6,031 per day.

Every penny really does count when it comes to fundraising. For more information or if you would like to organise a fundraising event for the Hospice please contact Anne Mac Oscar, Regional Marketing Officer for Armagh and Dungannon, on 028 30251333 or email macoscara@southernareahospiceservices.org.