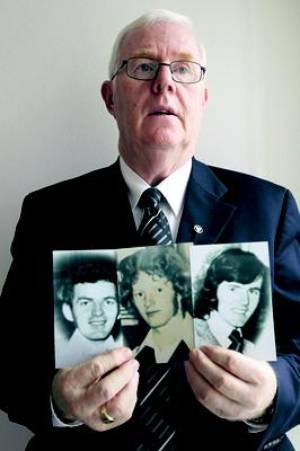 A judicial review into the alleged state collusion in the loyalist murders of three Catholic brothers in 1976 will come before the High Court next week.

Twenty-four-year-old John Martin Reavey and his brother Brian (22) were gunned down at their home in Whitecross on January 4, 1976, while another brother, 17-year-old Anthony, who was also shot by the UVF gunmen, died weeks later.

Three members of the O’Dowd family were also murdered at Ballydougan on that same night, while 10 Protestant textile workers were taken from their minibus, lined up and shot at Kingsmills the following day, in what was claimed as a retaliation attack.

It came before next week’s High Court Judicial Review into alleged involvement by the British Government and Military into the murders of John Martin, Brian and Anthony Reavey at their Whitecross home.

The Reavey family have long campaigned for justice for the three brothers but, sadly, their mother Sadie passed away two years ago.

Another brother, Eugene, (pictured) this week met with SDLP Westminster candidate Justin McNulty as that campaign goes on.

Mr McNulty said the alleged involvement of members of the British security forces in the South Armagh killings almost 40 years ago raises fundamental questions regarding State collusion with the notorious ‘Glenanne Gang’.

Mr McNulty said that one of the most bloodstained chapters of the Troubles would continue to raise many serious issues until the surviving members of the Reavey family “receive the justice that has been denied to them for four decades”. He made his comments after meeting with Eugene Reavey along with former Newry and Armagh MP Seamus Mallon and the Reavey case legal team, headed by Newry solicitor Rory McShane.

It came before next week’s High Court judicial review.

The SDLP said the “dignity and integrity of Eugene Reavey and his extended family in the quest for truth had been truly inspirational”.

He added: “I never fail to be amazed, and indeed humbled, at the sincerity and dignity of Eugene and his family circle in the way they continue to seek justice for the terrible way they suffered.

“Over the years the Reavey family, like so many others from all sides of the community, have had to suffer pain and injustice as they have struggled to find the real truth behind the loss of their loved ones.

“There are many unanswered questions in relation to the matter of collusion and cover-up that can only be addressed by a rigorous examination of all the relevant facts as part of next week’s judicial review.

“The daily suffering of the Reavey family is a legacy of sorrow that no family should ever have had to carry.”

Mr McNulty said that the briefing he had received from Rory McShane before the High Court hearing had made him even more determined to continue, at all political levels, to help uncover the truth in relation to the Reavey murders.

“In particular our community needs to be reassured that no cover-up of any British Government links with the Glenanne Gang, and especially in the way they were able to operate a reign of terror for many years, will be tolerated.”

The pledge of support from Justin McNulty has been welcomed by Eugene Reavey.

He said: “Over the years the support of former MP Seamus Mallon and Dominic Bradley MLA has been unwavering.

“They have brought our case, and they have many others, to both the floor of the House of Commons and Stormont.

“And I know that Justin McNulty will continue to work with them in the relentless search for the real truth behind the murders that brought such terrible pain, a pain that continues every day, to my family.”

Pub chain has not turned back on Armagh’s potential