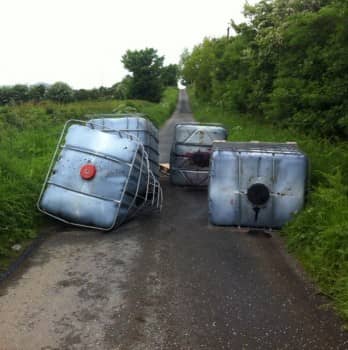 Grant’s Road in Jonesborough has been blocked by cubes of toxic waste, local Councillor Mickey Larkin has told Armagh I today (Saturday).

And he slammed those responsible, saying those who continue to dump their poisonous waste have nothing to offer communities and care little about them.

The Slieve Gullion SF representative said: “The Grant’s Road is currently blocked by these cubes. This is an attack on the local community and I would ask those engaged in this activity to desist.

“Farmers and residents have been unable to access their property because of the greed of a few.

“This substance is poisonous and is polluting our environment.

“I have reported this incident to the council and hope that it will be cleared within a few days.”

It is the latest in a long list of such incidents, like at Captain’s Road in Forkhill in June, as our picture shows.