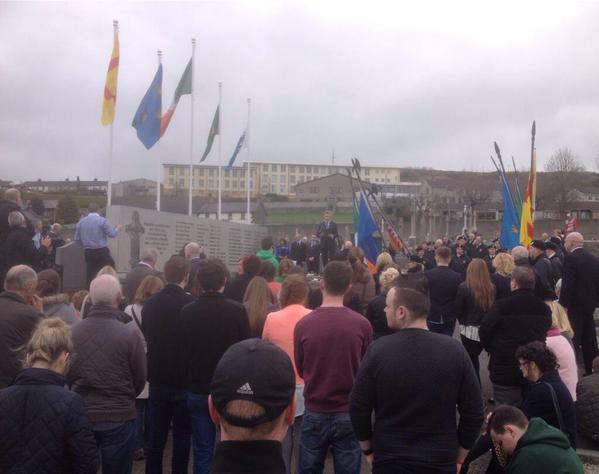 Five flags have been stolen from the republican plot at St Mary’s Cemetery in Newry in what one local MLA has described as a “disgusting act of vandalism”.

The theft took place between 10pm on Sunday night and 8am on Easter Monday, just hours after the annual Easter republican commemorations.

Sinn Fein Newry and Armagh MLA Mickey Brady has condemned those responsible for taking the Irish tricolour and the four provincial flags.

Mr Brady, who had earlier addressed a large crowd at the republican plot on Easter Sunday, said it was a disgusting act of vandalism.

“While any attack on a grave is a despicable act it is particularly hard to comprehend the mentality of anyone who would vandalise the graves of our patriot dead during Easter,” he said.

“This is an affront first and foremost to the families of those whose names are on the republican plot and we must never forget that, behind the parades and the speeches, there are families across Ireland still missing husbands, wives, fathers, mothers, sons and daughters.

“This is also an affront to republicans in general and to Newry as a whole, given that those who lie in the plot sacrificed so much for this city and its people.

“I would appeal to anyone with information about the stolen flags to get in contact with Sinn Fein but I would also appeal to the conscience of those behind this act to return them and ask that, whatever our political beliefs, we all show a little more respect for each others’ graves.”

“Is there anything more despicable or cowardly than attacking a grave?” he asked.

“The people who lie in this grave were not only Irish republican soldiers, they were the friends and family of many of the people who attended Sunday’s parade so this has obviously caused a lot of hurt and upset.

“I would ask anyone with information about the whereabouts of the flags to get in touch with us. A number of youths were seen with flags in the Mourne View Park area on Sunday night but this may not be related.”

Police have appealed for information following the theft of flags from a Cemetery on the Old Warrenpoint in Newry.

Anyone with any information about this incident can contact officers at Ardmore Police Station on the non-emergency number 101. Or if someone would prefer to provide information without giving their details, they can contact the independent charity Crimestoppers and speak to them anonymously on 0800 555 111.