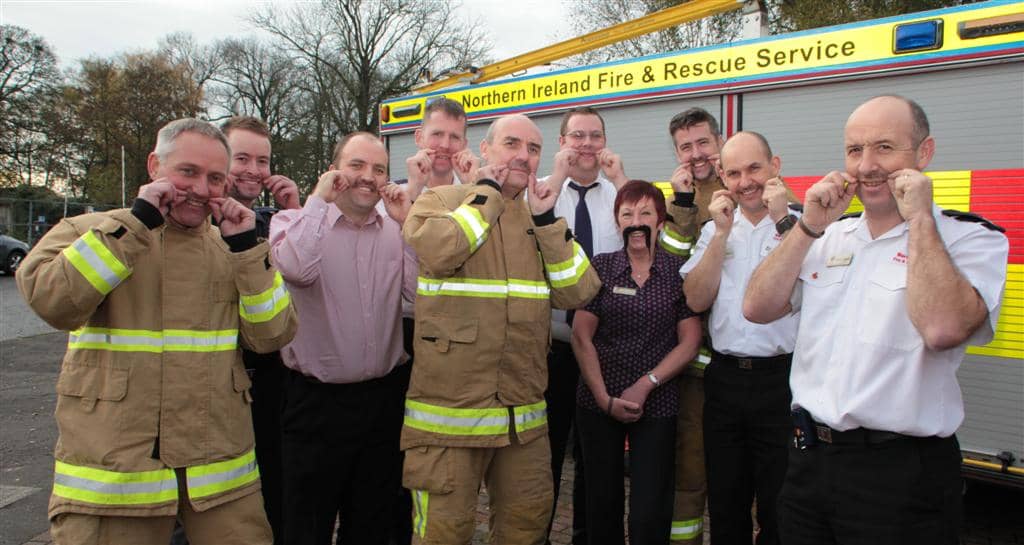 Northern Ireland Fire & Rescue Service (NIFRS) is embarking on the mass cultivation of facial fuzz this November – all in the name of charity and men’s health issues.

Fifty Firefighters and Support Staff, now known as ‘Mo Bros’ supported by their ‘Mo Sistas’, are downing their razors and growing moustaches as part of the ‘Made in Movember – Grow the Mo’ men’s health campaign.

Not only are these stubbly fluffy fundraisers on fire to raise bucket loads of money for prostate cancer, testicular cancer and men’s mental health but they are also on a mission to create awareness and spark conversations about men’s health issues at home, in the workplace and in their social circles.

Keith Black, Group Commander, Occupational Health and Team Captain of the NIFRS ‘Grow the Mo’ Team explains: “As a fire and rescue service it was a clean cut decision for us to get on board and support the worldwide ‘Made in Movember’ Men’s Health Campaign.

“We are only a few itchy days into this 30 day endeavour and there is no doubt that our new found whiskers and stubble are already generating a significant (and fun) talking point across the organisation – not just about the facial fuzz but about the campaign for serious men’s health issues that it represents.

“Each of our Mo Bros and Mo Sistas are undertaking a series of razor sharp fundraising activities over the coming weeks and we are encouraging everyone to support them in this global fundraising effort which is undoubtedly saving and improving the lives of men affected by prostate cancer, testicular cancer and mental health problems.

Jon Simm, Head of Communities, Made in Movember UK Campaign said: “We’re delighted that the NIFRS are on board and supporting Movember this year, an organisation that has an incredible impact on the local community. They are now champions of men’s health too for the month, and we have no doubt that their moustaches will spark conversations about issues affecting men all over Northern Ireland.”

Pictured: Firefighters and Support Staff at NIFRS are on a razor sharp mission ‘Growing the Mo’ to support the Men’s Health Campaign ‘Movember’.