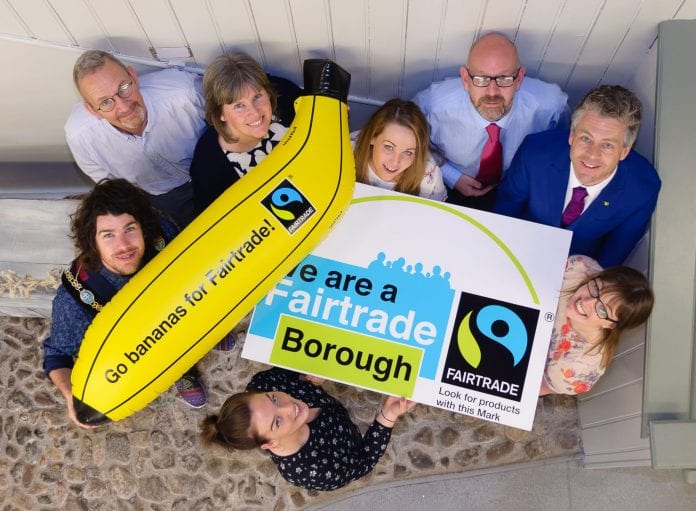 Armagh City, Banbridge and Craigavon Borough has successfully become a Fairtrade Borough and will retain this status for two years, following its ongoing commitment to promoting Fairtrade principles.

At a celebration event the Borough’s Fairtrade Steering Group revealed its plans to promote Fairtrade to more community groups, businesses and church groups in the area by taking part in campaigns, including the UK-wide Fairtrade Fortnight again in February 2018.

Banbridge area was first awarded its Fairtrade zone status in 2012 in recognition of the strong support for Fairtrade achieving five qualifying goals, including; a wide availability of Fairtrade products in local shops and catering outlets, and high levels of support from local people, businesses, the council, faith groups and schools.

In 2015 the Fairtrade Steering Committee began work to extend the reach of the Fairtrade campaign across the borough of Armagh City, Banbridge and Craigavon.

Lord Mayor Garath Keating, said: “We are delighted to have been declared a Fairtrade Borough. This result is down to hard work and support from local businesses, schools and faith groups across the borough, along with the dedication and commitment of the Fairtrade Steering Group.

“The council plan to continue to work alongside the Fairtrade Foundation and Fairtrade Ireland to promote the Fairtrade message, and are excited to see what we can achieve in the next two years.”

“Thanks to the ongoing support of the public and campaigners, an increasing number of farmers in developing countries are now selling their products on Fairtrade terms, bringing them a stable income, and the chance to trade their way out of poverty.”

Fairtrade helps small-scale farmers ensure they earn stable incomes and have long-term contracts with companies. In addition, they earn the Fairtrade Premium, which they invest as the farmer-owned co-operative democratically chooses, in projects that will benefit their business or community.

The FAIRTRADE Mark independently certifies that products meet economic, social and environmental standards. As such, it is the most widely recognised ethical mark worldwide.

For more information about the FAIRTRADE Mark and how to apply for Fairtrade status, visit www.fairtrade.org.uk.

To get involved in the Borough’s Fairtrade Campaign, please contact Gemma Richardson by email: gemma.richardson@armaghbanbridgecraigavon.gov.uk, or by phone: 028 406 60604.