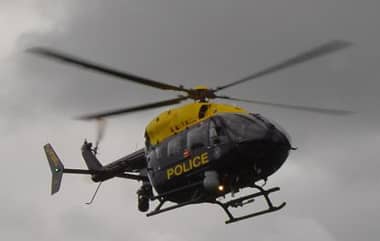 Local PSNI officers, the Air Support Unit and Northern Ireland Ambulance Service have helped save the life of an 11-year-old girl who was seriously injured when she fell off her bike in Castlewellan at the weekend.

Officers from the Newcastle Neighbourhood Policing Team were on duty at the Castlewellan Show on Saturday, July 19, when they were informed by a member of the public that an 11-year-old girl had fallen off her bicycle nearby and had sustained a serious leg injury.

The officers rushed to the young Co Down girl’s assistance immediately and administered first aid along with local members of the community until the paramedics arrived.

Realising the seriousness of the girl’s injury, the officers then asked for the Air Support Unit to be tasked immediately in order to convey the young girl to hospital for treatment as quickly as possible.

The PSNI helicopter landed at the site a short time later and took the girl and a rapid response paramedic to hospital where she underwent surgery on her leg.

She remains in hospital where her condition is now described as serious but stable.

Inspector Mark Peters, from Newcastle Neighbourhood Team, said the actions of the officers involved had helped to save the young girl.

He explained: “When the officers realised how seriously injured the young girl was, they took immediate action to do everything possible to help her.

“We have since been contacted by others who were involved in the incident and we have been told that without the help of those officers, the young girl may not have survived.

“This could have ended in tragedy and I am just glad the officers, both the local neighbourhood and response officers and the crew from the PSNI helicopter, were able to do their bit to help save this young girl’s life. We would all like to wish her a speedy recovery.

“As police officers, one of our main priorities is to keep people safe and this is another example of how the PSNI and our partner agencies work together to do this. As an officer, being able to help someone in this way makes our job worthwhile.”

Ruth McNamara, Ambulance Service Area Manager, praised the actions of all concerned in this operation.

She said: “With schools now out for the summer, we have noticed an increasing number of young people out and about enjoying activities which have been planned by various community groups. With such large numbers, there is always the potential for accidents to happen. Whilst the ambulance service will respond to every incident as quickly as we can, it is often the actions of those first on the scene that play a major part in the saving of a life.

“On this occasion it was the quick thinking of the PSNI officers and St John Ambulance volunteers who were on duty at the event that ensured that this young girl was given every chance to survive her ordeal.

“The Rapid Response Paramedic who arrived on the scene has been fulsome in his praise for these officers and we are delighted that the co-operation between the two services has had such a positive outcome.”