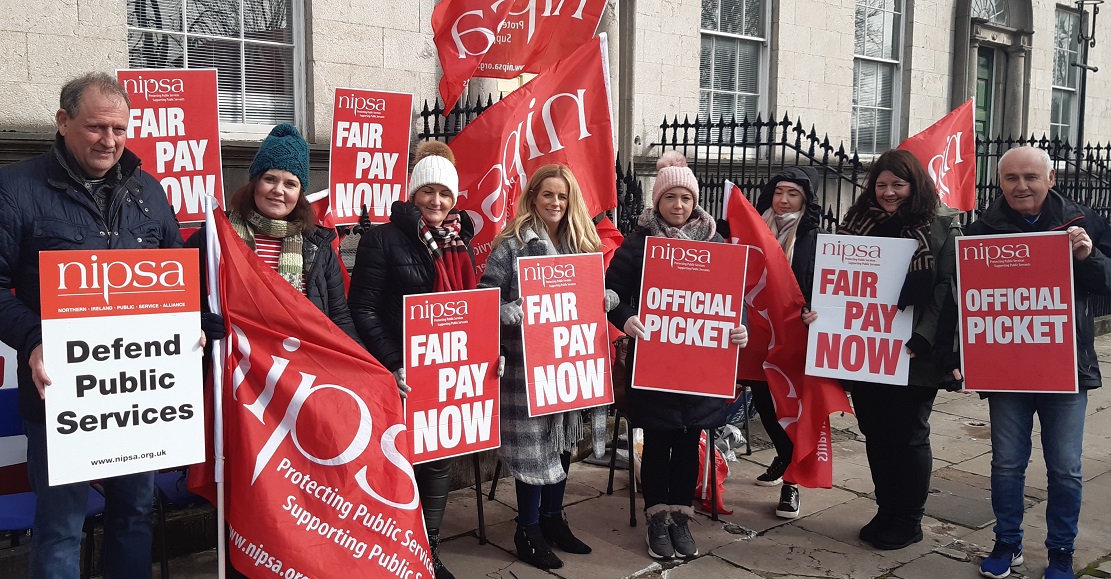 Education Welfare Officers will return to picket outside the Education Authority offices on the Mall in Armagh as NIPSA has announced plans for its longest continuous strike action in the EA’s history.

NIPSA, the largest union from the non-teaching workforce in education, has confirmed that members employed as Education Welfare Officers will embark on 16 full days of strike action starting from tomorrow (Tuesday), March 8.

Alan Law, Assistant Secretary (Acting), commenting on the planned strike action, said: “Education Welfare Officers play a hugely important role in the education of children and young people. They are instrumental in ensuring that attendance levels improve and work with families to ensure that this happens.

“There are extensive waiting lists to access an Education Welfare Officer. As of 31 January 2022, 925 children and young people are not having their needs met by the Education Authority.‍

“NIPSA regrets that the refusal by the Education Authority’s (EA) to address the pay demand is leading to increased waiting times, NIPSA members want to be providing for these vulnerable children and their families, but staff continue to be forced into industrial action as all other attempts to resolve this dispute have failed.

“As a result, NIPSA members continue their industrial action tomorrow and will be participating in almost continuous strike action from 8 March until 1 April.

“We remain ready to enter meaningful negotiations to resolve this dispute and call on all the Education Authority to do likewise.”‍

This announcement comes after a two-day picket outside the EA base at Mall East last month.

NIPSA trade union representative Helena McSherry said education welfare officers (EWOs) are required to have the same qualifications as social workers, yet their pay scales can differ by up to £5,000 pa.

She said: “The Education Authority have difficulty recruiting and keeping staff because of this vast difference in pay, as well as attracting people to the profession.

A large part of the EWO job involves working with pupils who have a poor attendance at school, to make sure they get the best education possible, as well as supporting pupils who are finding education challenging.

This is an escalation of strike action, with protestors also having previously taken their message to Stormont.