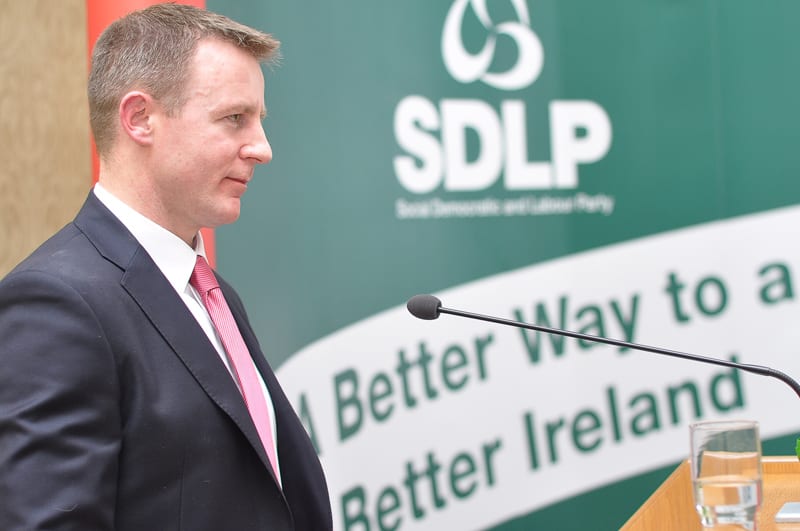 If the DUP and Sinn Fein get their way, we could see customs stations on the border, according to the SDLP’s Justin McNulty.

Mr McNulty says that now more than ever the SDLP is the only party that can protect people from severe financial hardship that would follow a UK exit from the EU.

And he has demanded that the DUP and Sinn Fein reveal their plans if their policies force Northern Ireland out of the EU.

“With the disturbing but unsurprising revelation that Northern Ireland has been hit harder by welfare reform than anywhere in Britain, it is crucial now more than ever that we resist all attempts to leave the European Union,” he said.

“If we were to leave the EU, it would result in the equivalent of every single family being a further £3000 worse off. It would also mean new customs stations on the border.

“Anyone interested in the future prosperity of this region must vote for the SDLP, which is the only party in the North that has consistently stood up against Tory austerity cuts in both Westminster and the Assembly, and has always been the most pro-EU voice in Northern politics.

“We already know that the DUP will demand that the new Prime Minister hold a referendum as the price of their support. David Cameron has already said he will do this meaning a vote for the DUP is equivalent to a vote for the Tories. The same is true with Sinn Fein, a party deeply divided on Europe and who cannot oppose a Tory referendum from outside Westminster.

“Other areas in the UK do not benefit from the EU in the same way as we do and may hold differencing views on a referendum. To sell support on the issue like the DUP, or to remain silent like Sinn Fein is a dangerous strategy.

“Have they any plan for what would happen if the link with Europe was severed as a result of their policies? If we leave the EU, farmers will lose almost 90% of their revenue, which comes directly from Single Farm Payments under the Common Agricultural Policy. Last year almost 30,000 farmers made applications to the EU for this funding.

“The SDLP will stand firm on our opposition to leaving the EU. We know how important the link has been to our recovery from the economic downturn and how vital is it to our future prosperity. The DUP and SF must tell us what they would do if their actions resulted in us leaving the EU.”