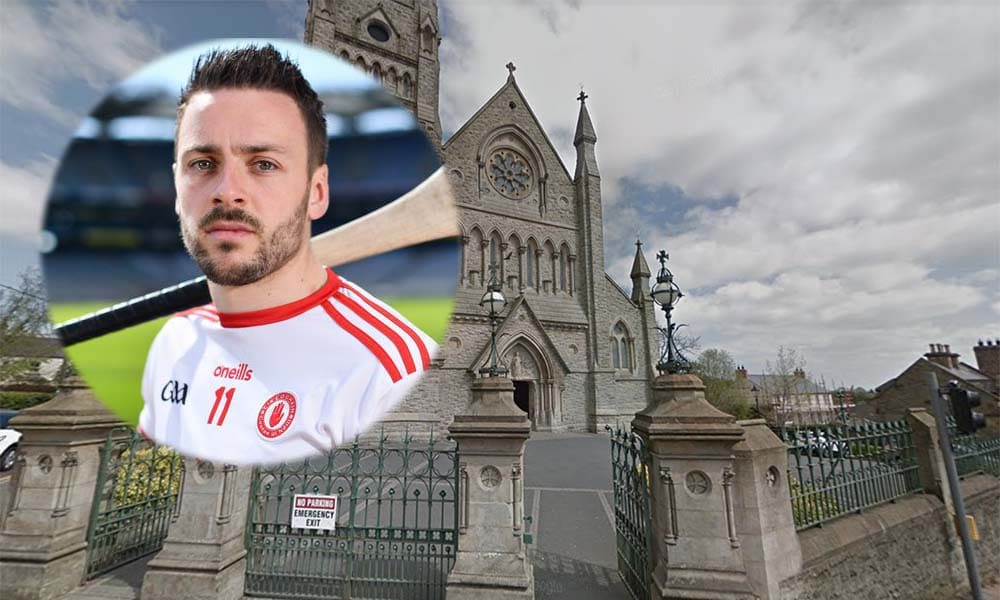 So much has been said of Damian Casey, the young Tyrone hurling star, since his death in Spain nine days ago.

But, The Very Rev Dean Kevin Donaghy, addressing hundreds of mourners at his Requiem Mass on Sunday afternoon – summed him up best, when he described him as “a man to lead by example, giving his all, a leader, an ambassador, an absolute gentleman”.

And as the celebrant heaped praise upon the 28-year-old, whose tragic and untimely death sent shockwaves across the country and beyond, he spoke no truer words when he declared Damian to have been: “Tyrone’s greatest hurler for sure!”

Heartbroken parents Sean and Susan and sisters Louise and Catherine led a wider circle of family and friends at a very touching and emotional Requiem Mass.

Representatives of all GAA disciplines, from many clubs and counties across Ireland, as well as officials and team-mates from Damian’s own County Tyrone and home club Eoghan Ruadh, were among the mourners.

The young Dungannon man’s remains were brought home by the Kevin Bell Repatriation Trust late last week, and it is to this very worthy cause the family had directed donations in lieu.

It was the powerful and uplifting words of You Raise Me Up which played out as those gathering to pay their respects filed in, and which accompanied Damian’s coffin as it was borne to the front of St Patrick’s Church in Dungannon on Sunday afternoon.

Cherished jerseys, hurl, helmet and sliotar – alongside a photograph of Damian in his Tyrone skip – were among the items placed at the altar.

The cortege had earlier made its way from the family home at Eskragh Road, where the church was filled to overflowing, with many more having assembled outside.

Musical arrangements brought a beautiful poignancy but a sense of comfort; The Lord Will Heal the Broken Heart; Still, My Soul Be Still; Lady of Knock; May the Road Rise to Meet You and, at the end, as the coffin was carried back outside en route to Carland Road Cemetery, the choice of accompaniment had been From Galway to Graceland.

There was scarcely a dry eye as a personally-penned piece – Just A Thought Away From Us – played out, as it promised memories of the popular young man would remain always close to hand, even now as God held him in His arms, as “Heaven’s newest star”.

Dean Donaghy, during the course of a very fittingly-worded homily, reflected on a man who had excelled in all spheres in life, who had given so much to others and made a lasting impression on all whom he met.

Describing his all-too-short 28 years as “well-packed with goodness and decency and abundant achievement”, the priest said: “Everything about him was pleasing to God, just as it was pleasing to all who shared life and time with Damian.”

Dean Donaghy spoke of the talented hurler as someone “with constant commitment and total desire to give of his best in everything he did, in family life, in school and university, in sport and play and in a successful but all too short working life”.

He told how the Eoghan Ruadh hurling clubman had “sought out all his life people who would be powerful, positive role models for him, people who he would imitate and emulate as well as admire”.

Added Dean Donaghy : “Damian was an accomplished pupil at all stages of his academic journey and a successful work colleague who was highly regarded by everyone he encountered in a challenging and constantly changing and developing field of engineering and of industry.

“Susan and Sean and Louise and Catherine have memories of a wonderful son and brother growing up.

“He was always great company in the family home, picking up from his parents and sisters a love and interest for all sports but latching on in his early years to his mother’s attachment to Man Utd.

“As the years progressed it was down to McHugh’s garden, known as the Croke Park of the Eskragh Road, where football and hurling, camogie and rounders and other games were the order of the day among cousins and neighbours and friends.

“At other times that same gathering and more besides from the hurling club would congregate at the granny flat at the Casey family home, a place of lots of laughter and many happy memories.”

The celebrant recalled how, for Damian, his “first taste of stardom” came back in his latter primary school years when he featured in the Mini 7s at half-time in the All-Ireland, not just once but twice!

It was the early days of a sporting journey which would see him take his place on the podium alongside the greats of the GAA games.

“The summer camps at Dromantine were another happy experience and Damian would come home full of the songs he had picked up during that annual camp,” said Dean Donaghy.

“In his teenage years it became clear that Damian could have been every bit as good a footballer as he was a hurler, but you couldn’t do both and Damian’s choice was the hurling; the speed and the skill and the scoring drew this dynamic sportsman to the hurling code.

“So much has been spoken and written about Damian these past days. As several people said, you could be hours at it and you wouldn’t cover all that could be said in praise and in tribute about Damian Casey.

“He was the perfect gentleman who could relate so exceptionally well to everyone, from young children to the elderly and everybody in between.

“He was always a man of good character and good humour, always more likely to be speaking words of praise than of criticism, an inspirational leader who sought to motivate and encourage and so bring others along, a man of integrity and honour.

“In all of his games as a hurler he was never once sent off the field of play. That says a lot about his character and temperament.”

Dean Donaghy told mourners the gifted young athlete “never played a game that he didn’t contribute to”, before declaring: “So whether for the Eoghan Ruadh club of Dungannon or the Red Hand of Tyrone, Damian was constantly a man to lead by example, giving his all, a leader, an ambassador, an absolute gentleman.

“His last appearance for the County team at Croke Park last month was a classic example of his outstanding performance on the field where, as captain of the team, he scored 14 points, and so led Tyrone to victory in the Nicky Rackard Cup final.

“Tyrone’s greatest hurler for sure!”

And away from the hurling field and in the field of employment he too found himself with capabilities that surpassed all expectations.

“He excelled in the classroom and at university as well, sailing through school with considerable ease and going on to achieve a degree in accountancy and then taking up employment with Ben McQuaid in the ever-developing industry for machinery for recycling and renewables,” said Fr Dean Donaghy, who told how Damian was “a key part of that success” enjoyed by his CRJ Services employer.

Indeed, the celebrant concluded that here was, surely, an all-rounder, an all-achiever and an all-time great, as he stated confidently: “Damian had the attributes and personality for success.”

As indicated, the words of a song written especially for the occasion, were perfect, simply perfect:

“In Eskragh Green you learned to be

“An Irish man so true.

“Through family sport, through faith and love,

“You became the man we knew.

“So many times you gave delight,

“As you played our precious game.

“You were Eoghan Ruadh’s favourite son,

“And the County called your name.”

And so from those memories of Damian’s remarkable sporting career, the dizzying heights of his success, to a shared assurance, a comfort and consolation in the days going forward…

“As the Gaels of Ireland mourn your loss,

“We struggle with our pain,

“But as you did in days before,

“You’re just a thought away from us.

“You’re just a thought away,

To his parents, Sean and Susan, sisters Louise and Catherine, family, friends, club-mates, colleagues and all who mourn Damian’s passing, we offer our sincerest sympathy at this time. May he Rest in Peace.