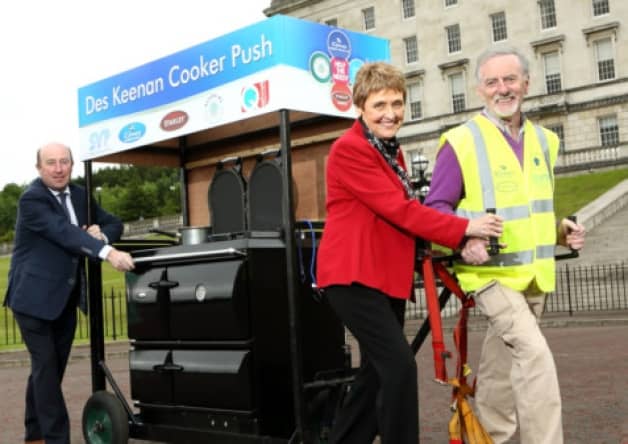 A 70 year old Cookstown man is putting the final touches to his fundraising efforts in a bid to raise £70,000 for two local charities.

Veteran fundraiser Des Keenan brought his custom made Waterford Stanley Cooker to Stormont, where he had the support of MLAs to help raise awareness of the Cooker Push Challenge.

The event is headed up by 70 year old Des, who has undertaken the outstanding challenge of pushing the Cooker through 20 towns in Northern Ireland in aid of Action MS and Saint Vincent De Paul Charities.

The unique charity challenge will involve pushing the cooker a distance of over 40 miles across 20 Towns province-wide from Tuesday 10th The cooker pushed by Des will cover the following route:

Des said: “I am really looking forward to getting out there and just getting the cooker on the road. I would encourage everyone to come out and support us along the route to help keep the spirits up.

“I have to also say I am overwhelmed by the support and generosity of the local community to date.

“We have been collecting in a number of towns across Northern Ireland and the support has been tremendous. Please do continue to dig deep and give what you can to help these two very needy charities”

“We applaud Des for taking on this challenge – it is certainly no mean feat! On behalf of SVP, I would like to sincerely thank him for including us as part of his fundraising efforts.

Calls to the charity for assistance continue to rise and as part of our local work, our volunteers visit thousands of families and individuals in need providing assistance, advice and practical support, mainly to help with food, energy and everyday our service is fully funded by the generous donations from the public and business organisations. It would not be possible without the like of Des and his

supporters so we are very grateful”.

Des and the organising team are also appealing for volunteers to join them along the route eachday to help collect donations. If anyone is able to spare the time and would like to help out; call Denis on 07710 014271 or email denisloughrey@btinternet.com or Des on 07768 535626 or email

You can keep up to date on the Charity Cooker Push Challenge on Facebook: ‘Des Keenan Cooker Push’ or follow it on Twitter @DesKeenan. The Cooker push has been kindly sponsored by Waterford Stanley and Q Radio Network.