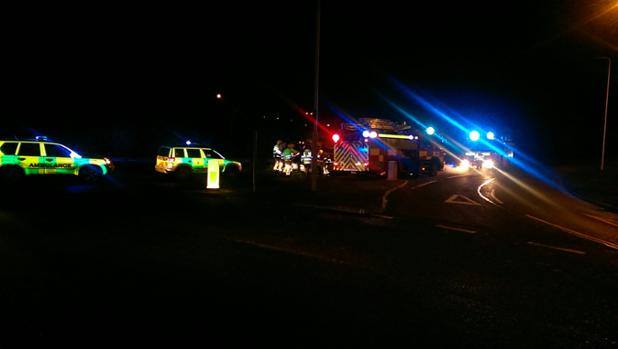 A staggering 38,787 people have been killed on roads north and south since records began.

All those who have died in road traffic collisions will be remembered on the World Day of Remembrance on Sunday 20 November 2016.

Department for Infrastructure Minister Chris Hazzard MLA, and Minister for Transport, Tourism and Sport Shane Ross TD, along with the Road Safety Authority (RSA), the Police Service of Northern Ireland (PSNI), An Garda Síochána, Fire & Rescue Services, Local Authorities and road safety groups are calling on road-users throughout the island of Ireland to join the international community in remembering all those who have lost their lives in road traffic collisions.

A total of 14,839 people have been killed on roads in the north since deaths were first recorded in 1931.

Infrastructure Minister, Chris Hazzard said: “Across many generations thousands of families have been devastated by the heartache of road tragedy. Almost 15,000 people, people just like you and me, have lost their lives across the north since records began. Many others have been seriously injured and are living with the physical and emotional scars.

“Road safety is a continuous challenge and road deaths do not discriminate. All road users are vulnerable – every journey, every day, every road. The certainty of the unexpected means that it is crucial to reduce speed, wear seatbelts and eliminate high risk behaviours. I am fully committed to improving safety for all road users. That is why I am working along with my road safety partners – the PSNI, the NI Fire and Rescue Service and the NI Ambulance Service amongst others – towards reducing the carnage on our roads. We must do everything possible to prevent this loss and suffering touching any more lives.

“I encourage all road users to commit to be the best road user they can be by making their pledge at http://www.sharetheroadtozero.com.  I firmly believe that by working together, we can rise to the challenge of making our roads safer for everyone.”

Minister for Transport, Tourism and Sport Shane Ross TD welcomed the fact that people both north and south were coming together to remember all the lives lost on the island’s roads.

“Many lives have been saved and injuries prevented as a result of the collaborative work by road safety agencies on both sides of the border in recent years so it is fitting that we should come together on World Day of Remembrance for Road Traffic Victims’ to remember those who have tragically died on the road and to also think of their families. I would also like to acknowledge the great work done by those in the Emergency Services and medical professionals, on both sides of the border, who have to deal with the aftermath and consequences of collisions. We will be thinking of them too on Sunday and the life-saving work that they do.”

Ms Moyagh Murdock, Chief Executive, Road Safety Authority said: “Tragically we have lost more lives on our roads this year compared to last year which is a very worrying development. I sincerely hope that all road users will use the day of remembrance for road traffic victims to reflect on their behaviour when using the roads and make a conscious effort to practice good road safety habits. I am pleased to team up with our colleagues in Northern Ireland again to raise awareness of this very important day.”

Police Service of Northern Ireland, Assistant Chief Constable Alan Todd said: “So far this year, Police officers have visited the homes of 59 families across Northern Ireland to deliver the devastating news that one of their loved ones has been killed on our roads. Many more have received news of serious injuries. Behind every statistic, every news report, there are families and friends who have been affected and we must remember them.

“This Sunday provides everyone with an opportunity to remember all those people who have lost their lives on our roads. While are thoughts are with the families and friends, a fitting tribute would be for everyone to share the responsibility for road safety. Slow down; Pay greater attention to the road and your surroundings; always wear a seatbelt and never drive after drinking or taking drugs. “

Chief Superintendent Aidan Reid of the Garda National Traffic Bureau said, “This Sunday gives us all an opportunity to reflect on our behaviour on the roads. An Garda Síochána is committed to working with communities and organisations to make every effort to keep our roads free from tragedy, but our biggest enemy is complacency. What someone might perceive as a small risk could have catastrophic consequences for someone else. Never, ever, drink and drive and never accept a lift in a car from a driver whom you suspect to have consumed alcohol or drugs. We would urge everyone to look at their actions on the roads and make every effort to be a better, safer driver.”