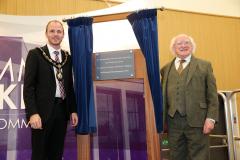 The spectacular venue showcases an innovative, modern, multi-purpose facility which commemorates the life and times of the internationally-celebrated Irish folk musician.

The state-of-the-art project comprises a spacious, multi-functional hall with additional flexible rooms and spaces available for use by the whole community, including a studio, an outdoor play area, an exhibition centre and fully equipped kitchens.

Located in Tommy Makem’s native Keady, the centre will be fully utilised as an important community space to support the further development of the town and county’s creative arts, crafts, music and cultural life.

The newly-opened facility was built on the site of the former community centre, which is located just off Bridge Street in the centre of the town and its attractive, contemporary exhibition spaces will be used to showcase an impressive array of artefacts donated from the Makem family to mark his memory. The musician, artist, poet and storyteller died in 2007 and was probably best known for his famous singing partnership with The Clancy Brothers – The Clancy Brothers and Tommy Makem – while being internationally-acclaimed for his skill and natural musical ability with several instruments, including the banjo, tin whistle, low whistle, guitar, bodhrán and bagpipes, while singing in a distinctive baritone.

President Higgins thanked the council – and SDLP Councillor Thomas O’Hanlon in particular – for the invitation to perform the official opening ceremony.

He was full of praise for the venue, telling guests: “It’s one of the finest buildings I have been in and I think future students of architecture will come and look at this building.”

President Higgins wished all of the people, of all ages and generations, “every happiness and success in the enjoyment of this building”.

“There should always be time for the arts,” declared President Higgins, who paid tribute to the multi-instrumental talents of Tommy Makem, the Bard of Armagh, and his “artistic prowess across the globe”.

He added: “Despite his long years in America, for Tommy, Keady and Armagh were what he called the ‘hub of his universe’ and I think that what you have invested in here is in creating a hub for the arts and creating a connection with that remark of his own.”

Lord Mayor Darryn Causby, speaking in the south Armagh town today, said: “Tommy Makem’s contribution to the international music and arts scene is rightfully renowned and this striking, cutting edge new centre represents a most fitting tribute to one of Keady’s greatest exports and I look forward to the facility becoming an integral part of local cultural and community life which encourages even greater numbers to immerse themselves in music, arts, dance and drama.

“The project is testament to the hard work and dedication of the Keady Regeneration Committee, Keady Working Group, councillors and community representatives and it is a sincere privilege to welcome President Higgins to officially mark its opening.” As part of the opening event, President Higgins met with members of the Makem and Connolly families, students from nearby St Patrick’s High School, as well as local elected representatives, schools, businesses, community and sporting representatives and those involved in the design and build of the new centre.

Tommy was born in 1932 and raised in Keady until the age of 23, when he moved to Dover, New Hampshire in the United States. He enjoyed a full life of music and arts in the US, including appearances on The Ed Sullivan Show and The Tonight Show, as well as performances at Carnegie Hall and for President John F. Kennedy.

A bridge over the Cocheco River on Washington Street Dover, New Hampshire, was named the Tommy and Mary Makem Memorial Bridge in 2010. Makem was married to Mary Shanahan, a native of Chicago, for 37 years.

Makem passed away on 1st August 2007 at the age of 74 following a lengthy battle with cancer.

The new centre was designed by DA Architects in Armagh and the main contractor was Brendan Loughran & Sons.