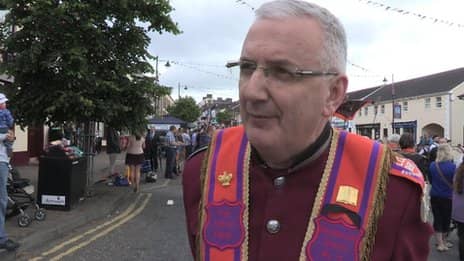 Local Ulster Unionist Assemblyman Danny Kennedy has warmly congratulated the WDM, Officers and members of Bessbrook District LOL No 11 for organising what he described as a “model and memorable” Twelfth demonstration in the village on Monday.

Mr Kennedy praised the organisers for making the event a very special expression of Orange culture in County Armagh.

He described the parade as a “unique carnival” which was enjoyed by the many thousands of marchers, band members and spectators who had flocked to the venue from all over County Armagh and much further afield.

Mr Kennedy, who participated in the parade as a member of Tullyvallen Silver Band and a Bessbrook Orangeman, said he was impressed by the great family atmosphere which existed. He said he was pleased that the Twelfth in County Armagh had now returned to its historic position as a day of fun and cultural expression enjoyed by all and threatening to no one.

The Newry and Armagh MLA also complimented Bessbrook District for the series of events which led up to the Twelfth itself, including the family fun evening. He described these events as very enjoyable and well organised, despite some changeable weather.

Mr Kennedy also thanked the various agencies, including Newry, Mourne & Down District Council, NIHE and Transport NI, who had co-operated with the organisers in ensuring that Bessbrook looked “truly sparkling” for all of the festivities.

Mr Kennedy also acknowledged the wider community for the positive atmosphere in which the Twelfth celebrations had been held in the village.