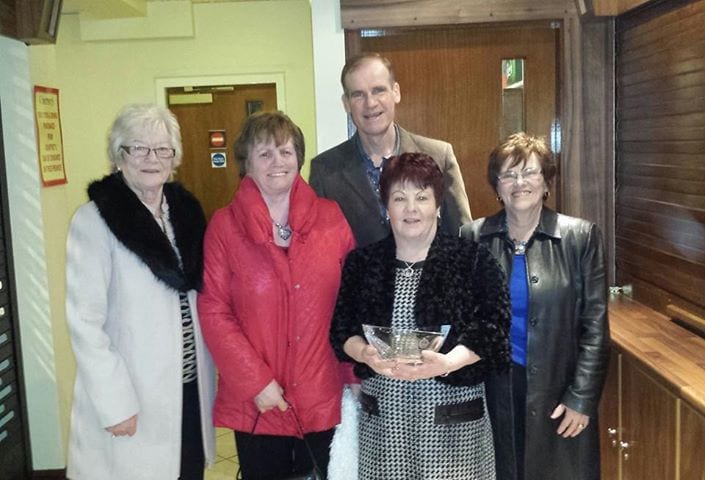 She has helped to transform the village of Culloville.

And now Bridie Traynor has been recognised for her endeavours over the years at Newry and Mourne District Council’s Community Civic Awards.

Local Councillor Terry Hearty, who had nominated Bridie for the award, said she was an outstanding ambassador for her community.

“Bridie was one of those who set up Culloville Community Association a number of years ago,” said the local Sinn Fein representative.

“Along with her small committee they started looking funding for environmental schemes around the village and, over a number of years, this committee transformed the village of Culloville, drawing down thousands of pounds for the local community and enhancing the village for locals and visitors.

“Along with the normal work of her committee, which includes hanging baskets, flower beds, weeding, litter picking, along with doing the 50/50 Club each week, Bridie has been involved with lobbying the various agencies, including Roads Service, Housing Executive, Street Lighting and Newry and Mourne District Council, to deliver for the area.”

The councillor said the Culloville committee was a great example of dedicated community-focused activists.

“Within a few years the Culloville committee was leading the way for other groups to emulate.

“They also opened a community building where many courses and classes were delivered to the local community. It was vibrant with social and recreational activities and has hosted public information forums and meetings.

“The committee, in conjunction with the local GAA club, delivered a fabulous walking track which is extremely well used by the local community. I

“In partnership  with the Development Association, the  local GAA Club and Newry and Mourne District Council, a magnificent Community Centre, valued at over £1 million, has been delivered.

“These are just a snippet of the projects which Bridie and her committee have been involved in, and Bridie is an extremely worthy recipient of this Community Civic Award.”

Police in county Armagh investigating links into spate of crimes

Armagh expected to be hit with snow over next TWO days