The McConville family business - trading for close to 50 years - would be demolished and rebuilt to provide a modern open plan pharmacy, with sales area, large dispensary, consultation rooms and staff facilities 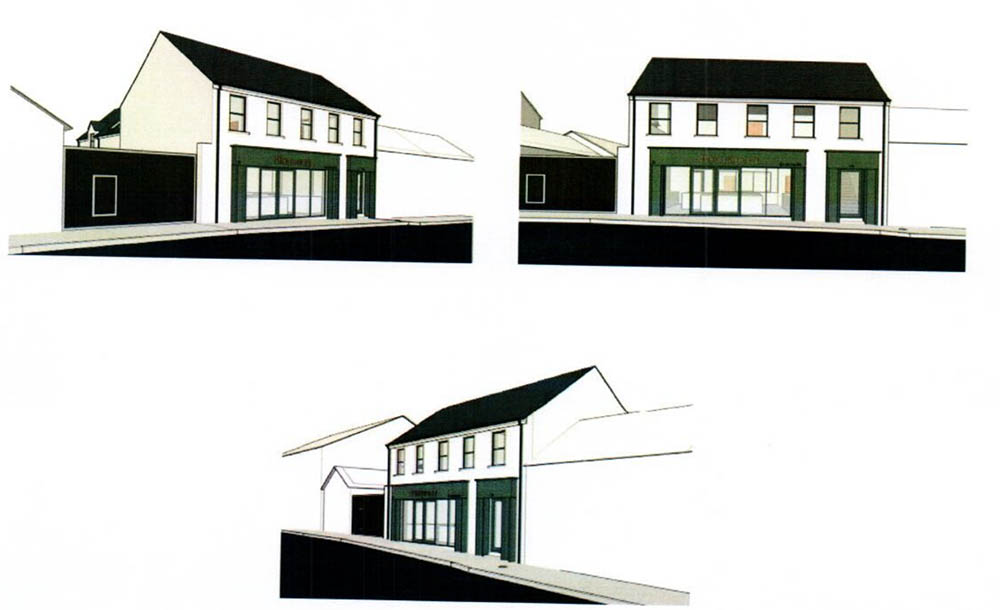 A south Armagh pharmacy could be demolished and replaced with a much larger and more modern new development as part of a “significant investment” in the local  community.

The plans centre around McConville’s Pharmacy, at North Street in Crossmaglen, a family-run business which has been trading for close to 50 years.

According to a planning statement, the development – at a cost in the region of £550,000 – will “safeguard the future of an established and locally important pharmacy business to the people of Crossmaglen and the greater Crossmaglen district”.

Proposals have been drawn up and submitted to Newry, Mourne and Down District Council.

If approved, the long-standing pharmacy building would be demolished, together with the neighbouring residential property and outbuildings and storage facilities.

In its place, it is intended to construct a new retail outlet at ground floor, as well as two one-bedroom apartments above.

The apartments would be intended as residences for the son and daughter of the owner, who both work in the family business.

There would be 31 parking spaces provided to the rear.

According to the planning submission by MJ McConville, trading as Annie McConville Ltd, the new development would lead to the creation of a small number of new jobs.

A supporting planning statement reveals that the demolition is “necessary” to improve current facilities in accordance with Pharmaceutical Society NI guidelines and recommendations for operating pharmacies.

It says the development – with a preliminary estimate of around £550,000 – would be a “significant economic investment in the town of Crossmaglen at a time when the local economy is recovering from the effects of the recent pandemic”.

It says there will be “spin-off benefits to the local construction industry” and two new jobs would be created, increasing existing staff from four to six.

The proposals would also mean a “wider variety of pharmacy services within the new premises”.

The statement explains: “The new building and associated shop front, whilst retaining traditional style, detailing and proportions, will promote new branding and appeal to a greater customer base.”

And it adds: “The new build will provide modern open plan retail format required for pharmacy premises which will safeguard the continued use of the building as an important business entity within the Crossmaglen community.”

The proposals are due to be publicly advertised next week before being given detailed consideration by planning officials.