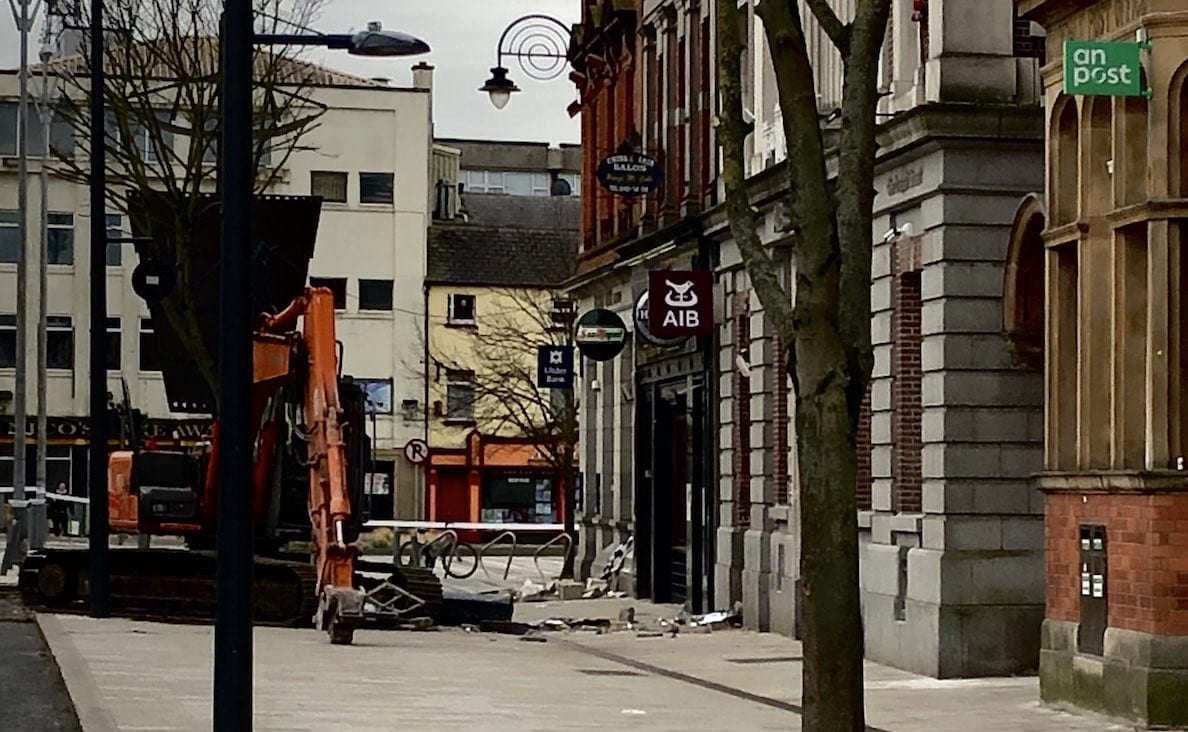 Judge Kerr revealed that putting everything together including the thefts of the ATMs, the stolen vehicles and excavator used and the police operation, the estimated cost involved was “in and around £500,000….but I remind myself that I’m sentencing these defendants on the roles they played,” rather than the thefts themselves.

“If that were the case, sentences would be significantly larger and into double figures,” warned Judge Kerr.

Days before their trial was due to begin earlier this year Nolan, from the Bonds Road and Muckian, from the Carrive Road, both in Silverbridge, south Armagh, entered guilty pleas to the four offences committed on 4 April 2020 including three charges of handling property stolen in the Rep. of Ireland and receiving a stolen trailer.

Described as akin to a “military operation,” the court heard that a number of vehicles, including the pickup truck, were stolen from a house in Co. Monaghan in a “creeper burglary.”

In the early hours two stolen vehicles, a van and a Mercedes, were set on fire outside Dundalk Gardaí station and meanwhile, a stolen lorry was used to block the road while the pickup truck towed a low loader trailer to Main Street.

The two ATMs, containing more than 300,000 Euro between them, were ripped from the walls by the excavator “in seconds” and leaves into the trailer which was abandoned during the ensuing pursuit police.

Up to six men were seen communicating on walkie talkies but having been alerted by an officer monitoring cctv cameras, Gardaí officers arrived at the scene “within seconds” of the men leaving, using police cars and a helicopter summoned from Dublin to pursue them as they crossed the border into NI.

Muckian and Nolan fled to Muckian’s home but were arrested after “armed officers forced entry.”

Although the pair denied involvement and then refused to answer police questions, they later admitted they were to be paid £1,000 each for their roles.

Jailing them, Judge Kerr said although he was giving them credit for admitting their guilt, he added that was limited as “in my view, they were essentially caught red handed.”

Detectives from the Police Service of Northern Ireland acknowledged the sentences handed down to two men.

Detective Inspector Shaw said: “The cash machines were taken from two banks in the Main Street area of Dundalk in the early hours of April 4, 2020.

“A stolen digger was used to smash into the banks; the two machines were then removed and taken away on a trailer.

“ATM thefts cause financial harm, and untold fear and disruption – fear in the local community and disruption to local people who rely upon the service.  The fact that the two men have appeared before court today is a result of the collaborative, joined-up efforts between our two police services.”

Chief Superintendent Alan McGovern from An Garda Síochána added: “This outcome highlights the benefits of the collaborative approach taken by both An Garda Síochána and the PSNI to prevent criminals using the border for criminal enterprise. These crimes have a devastating impact on local communities.  Not just for citizens who depend on access to ATM machines but also for the business community.”