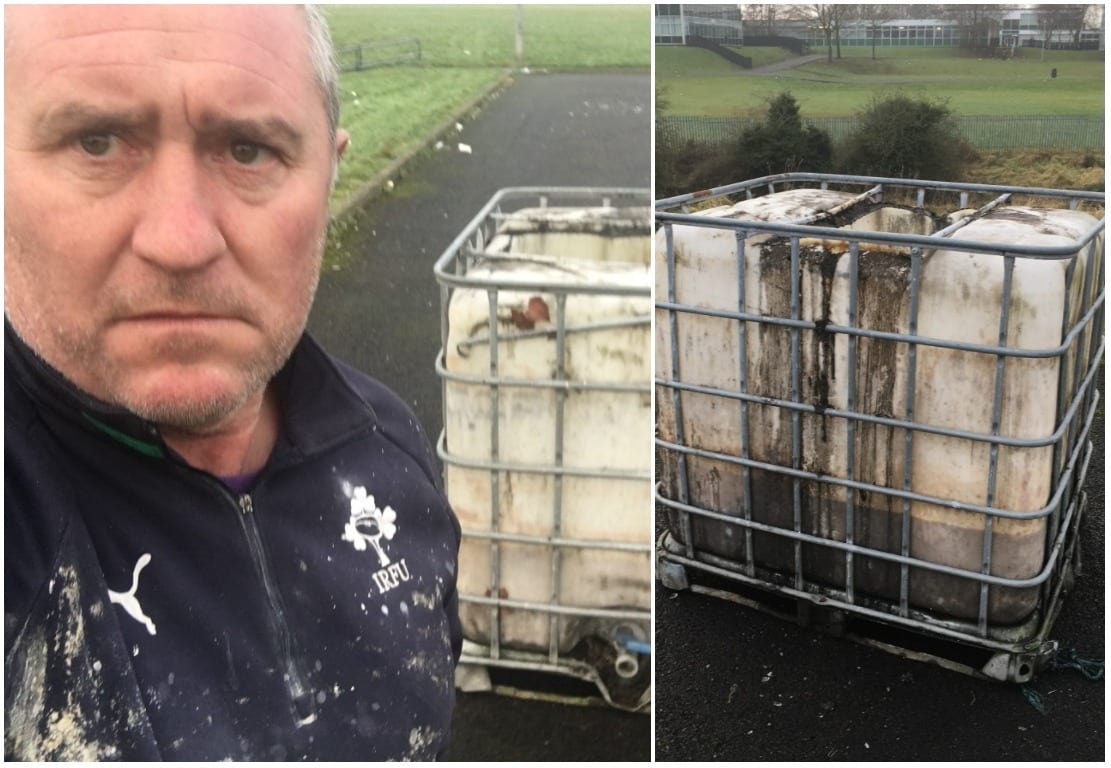 The amount of money spent by council cleaning up after fly-tippers in the last 12 months would be enough to put a dozen CCTV cameras at hotspots across the Borough, says SDLP councillor Declan McAlinden.

Earlier this week, Armagh I released figures for the worst offending roads across the borough, and since then there have been a number of more serious incidents in both Armagh and Craigavon.

On Wednesday, councillor McAlinden – who deals with similar calls from members of the public now almost on a daily basis – was tasked to the Monbrief Road in Craigavon, where laundered fuel waste was dumped, just yards from Lismore Comprehensive and playing fields.

He said it’s time Armagh City, Banbridge and Craigavon Borough Council looked at more robust methods of dealing what he has described as an “epidemic”.

He says the money it has cost council to attend and clean these messes would have been enough to supply at least 12 CCTV cameras in the most affected areas of Craigavon.

And he said it’s time for heavier fines.

Meanwhile, in Armagh tyres and household waste were dumped over a number of nights at the Ballyrath Road in Milford and Rock Road in Armagh.

“Those responsible for these actions should be ashamed of themselves, how would they like this material dumped at their front doors?” said councillor Thomas O’Hanlon.

“When we purchase new tyres from a dealer we pay a fee for the tyres to be disposed of. Yet some unscrupulous dealer in this incident has decided not to bother going through the proper channels, instead they have just abandoned them along the road side.

“It is us the ratepayer who is now responsible for paying for the clear up of the dumped waste.”

He added: “In addition to the tyres, on the Rock Road a bag of light fittings has also been dumped along the roadside.  I don’t know if these incidents are connected, but if not it just adds to the problem.

“If someone sees someone else dumping them they think it’s fair game. Well, it’s not!

“I have liaised with our Operational Services team to have these areas cleared, and it will happen in the coming days.

“However, I have also asked Environmental Health to become involved as well as the Northern Ireland Environment Agency.

“NIEA are responsible for licensing tyre distributors and retailers so they too have a role to play in stopping this activity.  As always in life, the actions of a few impact on everyone else.

“This will mean that all those involved in tyre retailing will now be monitored more closely and yet the vast majority are responsible, decent people earning a living and could do without additional red tape monitoring brings with it.

“There is no excuse for the indiscriminate dumping of waste. In addition to fortnightly collections of black bins, weekly collections of recyclables there are excellent facilities at the Council’s amenity sites at Station Road in Armagh as well as in Keady, Markethill and Tandragee.

“I would appeal for those responsible to stop, and if anyone knows anything about these or other incidents please come forward.  These incidents must stop.”

Sinn Fein’s Darren McNally has also called on anyone with . information to get in touch with him or the relevant authority.

“The people involved in this activity often pick areas of outstanding beauty or isolated rural roads they do not care for the community that live in that area, this week it’s the Ballyrath/Rock Roads, a few weeks ago it was Upper Darkley in the recent past it has been Carrickatuke view point. Where will they dump next time?

“I am asking anyone who knows anything about these incidents or other incidents of fly tipping/ dumping to get in contact with environmental health or myself.

“The public are fed up with this behaviour! No one has the right to turn our countryside into a rubbish tip.”