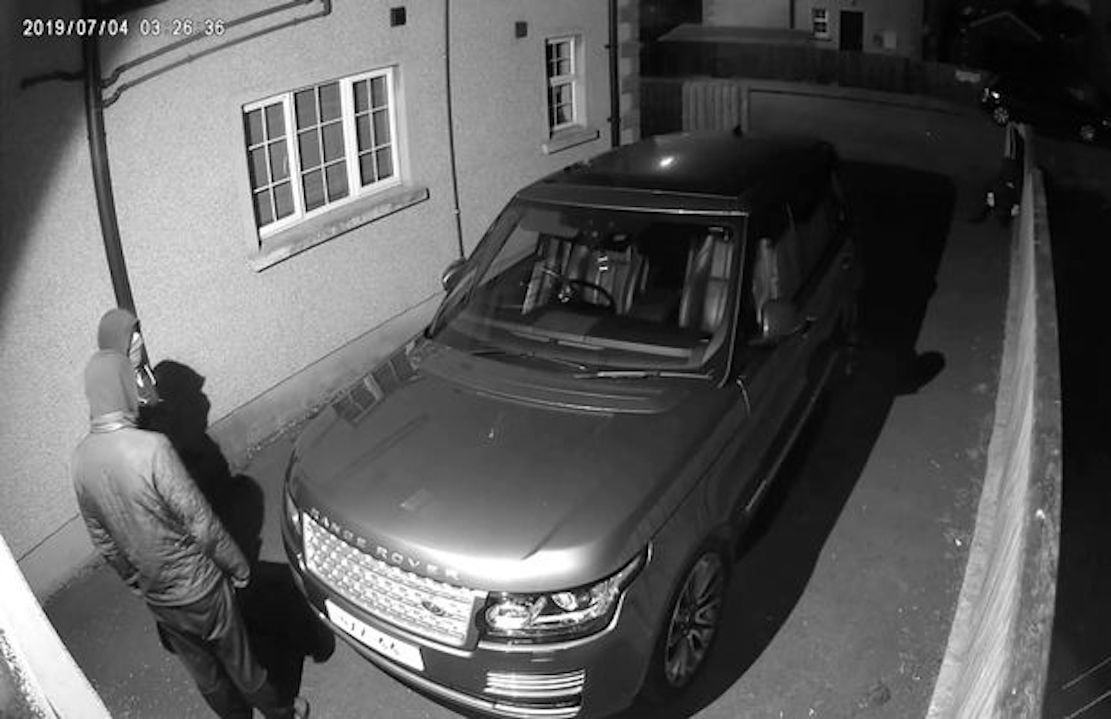 Thieves attempted to break into a garage in Donaghcloney and steal a keyless car just weeks after a Range Rover was taken from the village in similar fashion.

Donaghacloney Events Team reported the attempted theft, at around 3am, saying police were on the scene in minutes.

Vigilance has been heighten following the theft of a Range Rover from outside a residential property in Laurelvale Grove on July 4 (pictured above).

Video from the scene a few weeks ago showed the thieves use a gadget in a plastic bag to gain entry to the car and start the ignition.

Three masked men made off with the vehicle within minutes.

Police say they believe the BMW X5 vehicle which the men arrived in had also been stolen from a nearby property.

Speaking at the time, Chief Inspector Tim Flanigan said: “At around 8am, it was reported to police that a number of people arrived at a house in the area driving a dark coloured BMW X5 vehicle. They exited the car, unlocked a Range Rover vehicle parked nearby with a handheld device.

“It is reported the vehicle unlocked and the persons were able to make off from the scene in both vehicles towards the Donaghcloney village area following the incident.

“Police believe the BMW X5 vehicle driven by the persons was stolen from a property at the Gannon Lodge area of Craigavon sometime between 8pm on Wednesday 3rd July and 9:15am on Thursday 4th July. ”

Inspector Flanigan added: “We would take this opportunity to warn vehicle owners that with advances in technology, thieves are now able to gain access to your vehicle by redirecting the wireless signal from your key fob.

“Motor vehicles are extremely expensive and owners should take the same precautions as they do with home security. Establish a routine to help keep your vehicle safe, including using your garage if available to secure your vehicle.

“Use physical car locks such as steering column locks and chains, as well as keeping all car keys (including spares) away from exterior doors and walls. Motorists are also advised to use a blocking pouch (lined with metallic material) to help block the wireless signal from your key fob.

“Enquiries are continuing and we would appeal to anyone who witnessed either incident to contact police in Lurgan on 101, quoting reference number 326 4/7/19.