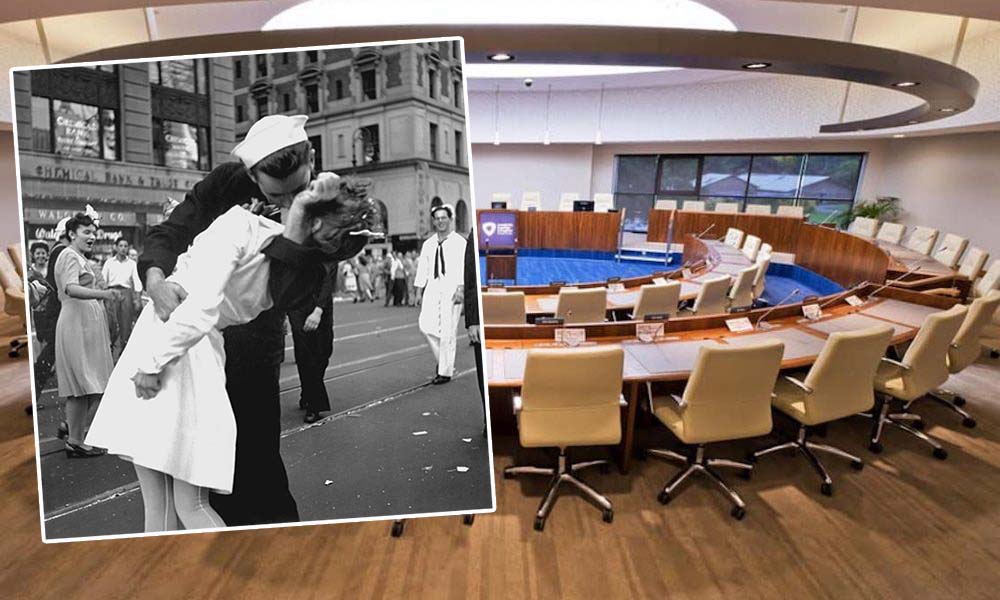 An attempt to vote on a proposal to stage VJ Day celebrations in the borough turned into a complete and utter farce on Monday night.

If it wasn’t the political sparring causing exasperated councillors to drop their head in hands at times, it was the almost comedic IT malfunctions during the vote – carried out on the online platform Zoom – which caused, what normally takes no more than two minutes in the Council chamber, to extend well beyond the 30-minute mark.

During the meeting, which lasted almost into Tuesday morning – having begun at 6.30pm on Monday – councillors debated a range of issues, some more controversial than others.

One of the proposals, tabled by DUP Councillor Mark Baxter – and seconded by Ulster Unionist Louise McKinstry –  was for Council to commemorate the 75th anniversary of VJ (Victory in Japan) Day.

“I think it would be remiss of this Council if we didn’t, in some way, celebrate this and remember some of our relatives within the borough who fought and died for our freedom in the Second World War,” Councillor Baxter told the Zoom group.

“I want to make a proposal that we have some sort of outdoor event to recognise it in whatever way possible.”

However, Sinn Fein’s Liam Mackle said Council had previously agreed they would do the same online events as they did for VE Day.

“I just don’t see how we could possibly have the time to do anything between now and August 15,” Councillor Mackle retorted.

He said Councillor Baxter was taking “a back door route to get money for what is a wee pet project of his and not something we could support”.

“We cannot see that in the timeframe there is any possibility that Council could safely organise an outdoor event – it just doesn’t make any sense at all, it’s a publicity stunt,” he added.

At which point, Councillor McKinstry interjected.

“I actually don’t think you can belittle VJ Day and consign it to something like a pet project,” she retaliated. “This significantly marks the end of the Second World War. The outcome of that conflict means we can enjoy the freedoms we have today.”

UUP Alderman Glenn Barr said he wanted to remind people that it was “all sections of the community from here who served on VE Day and were subsequently sent east to help with VJ Day”.

Veteran UUP councillor Jim Speers, who supported the motion, asked that members did not see this as a controversial decision.

“It wasn’t a sectarian issue by any stretch, it was something that was much greater and much wider than that….I would appeal to members to look on it in a wider sense.”

He added: “It’s very unfair on those who served in the war to bring this down into a controversial, maybe even a sectarian, issue, and I would appeal to members to be open-minded and look upon this in a slightly wider context…and recognise that this was of fundamental importance to a very wide section of the community.

“I can’t go back that far myself but I have spoken to people who could, and speaking to them, the celebrations were not consigned on a sectarian basis but rather they were happening right across the community. We’re taking ourselves back to a very bad place if we just look at things in a sense of one side of the community against the other.”

SDLP Councillor Thomas O’Hanlon said he had no objection to marking VJ Day but raised an issue around public gatherings and asked how social distancing would be measured.

Sinn Fein’s Catherine Nelson commented: “If I reflect back on the history of this Council I don’t recall at any time Council marking VJ Day so it just feels like members are Googling historical events in their free time, firing them into a Council meeting with no warning, simply to create division.

“We are working day and night to save money and protect the ratepayer next year and in a public meeting of Council with the cameras rolling this comes across as nothing more than a political stunt.

“In carrying out an event such as this, we certainly wouldn’t be the shining example that we as a Council should be to those we are asking not to go and gather in large numbers.”

This comment prompted the DUP’s Darryn Causby to lob his own retort across the virtual chamber – “your party has no more authority on telling people what to do” – as Lord Mayor Kevin Savage tried his best to control the bickering.

SDLP councillor Joe Nelson told members of how Council is now facing into the biggest crisis in recent memory and how, that as a public entity, it is about to embark on a review of its financial position.

“Going on the meetings we had last week, we have a major piece of work to do in getting this Council back on track,” he iterated. “There seems to be an innate desire to commemorate, or celebrate whatever; I think we just need to put our heads down and get on with it.

“How are we going to know in approximately two and a half weeks what the situation is going to be, potentially pouring money into preparing an event that couldn’t involve more than 30 people at the minute?”

“I’m a wee bit baffled to what the issue is here, everyone knows there are guidelines to be followed, people don’t actually adhere to follow those guidelines, even though they preach about them but how and ever that is not what we are proposing; we are proposing to stay within the guidelines and the reason it is so important this year as opposed to other years is the fact it’s a very special anniversary – it’s the 75th anniversary.”

Councillor Causby, given his chance to speak, focused on the “very disappointing tone” of the meeting.

“I find to be accused of having pet projects and Googling history events to be somewhat disingenuous and disrespectful from a party that claims equality, integrity and respect for all, but maybe that’s just on their terms,” he said.

“It’s also very hard to hear their cries around Covid restrictions under the sound of hypocrisy that comes from their party, given the facts around the events in west Belfast and Bobby Storey’s funeral.”

Councillor Mackle replied: “Just to clarify, I wasn’t belittling VJ Day, as we agreed at party leaders’ meeting during the week a method for commemorating that and I thought everyone was in agreement with, but in an act of bad faith, Councillor Baxter, in his third attempt this week, tries to prise a large amount of money out of this Council who are in dire financial straits, for his pet project.

“Yes, it is the 75th anniversary of VJ Day, but did that just suddenly occur to the DUP this week?”

But Councillor Mackle fired back: “I’m not free Mark.”

Independent Councillor Paul Berry had the final say on the matter.

“Both sides gave their lives but typical Northern Ireland, this has been turned into a political football.

“Councillors put this proposal forward on the basis that all of these events will be solely in line with the guidelines, so let’s be innovative and remember those men who sacrificed their lives for our freedom and stop turning it into a pit, which is what Councillor Mackle has turned it into – typical on his behalf.

“Councillor Nelson asked about risk assessment; she didn’t ask Mary Lou if Bobby Storey’s funeral was risk assessed because she would know the particular answer.

“Let’s get this VJ Day celebrated and stop allowing Sinn Fein, who don’t allow things in their view to remember real soldiers; men who fought for freedom and democracy in a proper way.”

The drama looked to have subsided for a period as the Lord Mayor called for a vote on the matter.

The yays, nays and abstentions rang out until, they didn’t. It all came to a grinding halt when several of the councillors couldn’t get their microphones working.

Despite a thumbs up to the question, Alderman Junior McCrum was told he would have to be heard.

Fifteen minutes later, the vote – under farcical circumstances – concluded with the proposal to mark VJ passing 25 to nine, with five abstentions.

Council said they are reviewing the matter of technical issues for future meetings, with Councillor Causby suggesting a return to the chamber next month.

“It is our view that we should now be getting back to the chamber,” he said.

“What that looks like, we can iron out going forward and we are happy to engage in these discussions. There is no reason why we can not meet in the same way Mid Ulster is currently meeting.

“‘Zoom’ has for the most part worked for us and those who can not make Council meetings in person could still participate via these digital means.

“We are of the view that we need to get Council back to meeting in person.”