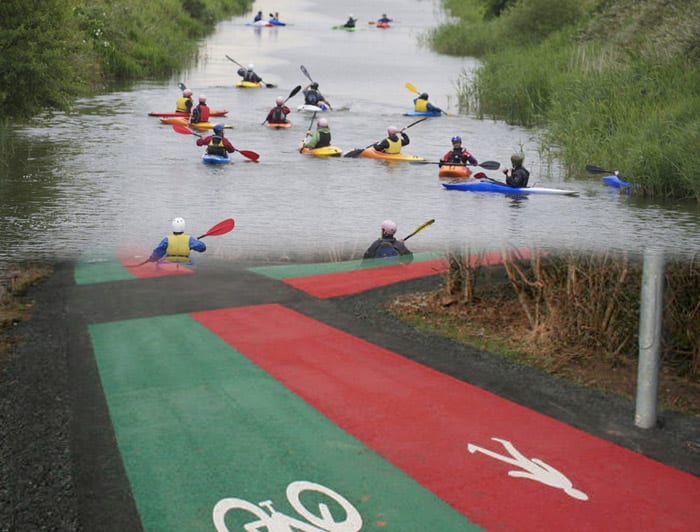 An exciting borough-wide blueway to cater to canoeists, anglers and water enthusiasts – which would include camping facilities en route – is being proposed for the Armagh, Banbridge and Craigavon Council area, Armagh I can reveal.

And the extension of the greenway – for walkers and cyclists – is also being pursued.

The creation of a digital hub and a programme of investment in a range of buildings of ‘built heritage’ significance are high on the agenda.

Business cases for all four of these proposals are expected to be developed, as they are being viewed as having the potential to attract millions of pounds of funding to deliver.

A number of European funding programmes will be seeking applications in the coming months and Armagh City, Banbridge and Craigavon Borough Council does not want to miss the boat, so to speak.

It intends to draw up a number of positive proposals for the borough to have them in a ‘state of readiness’ for investment.

Four are being looked at and these will go to a meeting of the council’s economic development and regeneration committeee tonight (Tuesday) for decisions to be made.

Councillors will be asked to approve spending £5,000 on each to draw up a full business case and proposals for submission for funding opportunities.

They have been informed that funding bodies are more likely to commit with firm plans in place.

One of the proposals is for the creation of blueway facilities along the length of the Newry to Portadown Canal, and on the Blackwater River/Ulster Canal route.

Blueways follow the length of inland waterways and could feature campsites, facilities for canoeing, kayaking, fishing spots, boating, and other such as activities for water activities and outdoors enthusiasts.

Councillors have been told that the creation of new blueway facilities could “attract new social energiser visitors and great escapers to the borough who want to take in the natural beauty of the local landscape, combined with activities such as canoeing and cycling along with facilities to relax and stay overnight”.

From blueway to greenway and another opportunity will be explored.

In March, a £1.3 million greenway linking Portadown and Lurgan was launched. But it was last October that Armagh I first reported plans to bid for European funding to progress the cross-border ‘greenway’ project.

Securing money to link up between Monaghan and Middletown would be the first step, but it would be the long-term goal to progress through Armagh and eventually link up with the towpath that runs between Newry and Portadown.

It is now intended to prepare a plan for a ‘Greenway Mobility Scheme’ as council hopes to “ensure the borough is connected, thereby helping to improve our transport links via greenways, rail halts and linkages”. It is hoped that the extension of the greenway – a safe cycle and walking trail away from roads and traffic – would “reduce reliance on cars as a mode of transport”.

Another project up for consideration is for the creation of a new digital hub to help stimulate innovation and competiveness of the area, giving the borough the opportunity to attract inward investment from the ‘high tech sector’ while helping “our own indigenous business to develop”.

The fourth proposal centres on the protection of the build heritage through “helping to enhance our natural and cultural assets”.

Funding has already been secured from the Heritage Lottery Fund to restore and bring back into productive use a range of buildings in Armagh city centre.

But this borough-wide proposal would allow more to be included as it would “support a range of buildings of a built heritage significance that fall outside buildings selected through Heritage Lottery Funding”.

These four proposals are to be considered tonight (Tuesday).

Up to £5,000 is required for each and would be used to develop the greenbook economic report for each respective project and technical support for concept designs.

It would be hoped then to target funding opportunities such as the Urban Innovation Action Programme 2015-2020, which has been created to test new approaches to the challenges faced by cities though pilot projects.

The fund has a total budget of €372 million over that five-year period with a potential maximum award of €5m per project. A further call for applications will open in November 2016.

Another possibility is the North West Europe Atlantic Area programme, which is currently open for expression of interest, with the full application process expected in September and October.

Councillors have been told of the need to be ready if they are to apply and hope to gain grants to make these proposals a reality.

In a paper to council, they have been informed: “Funders expect projects to be worked up to a state of readiness for investment.

“This involves having in place a clear business case, key stakeholders partnership in place, clear realistic objectives along with projects worked up to planning stage.”