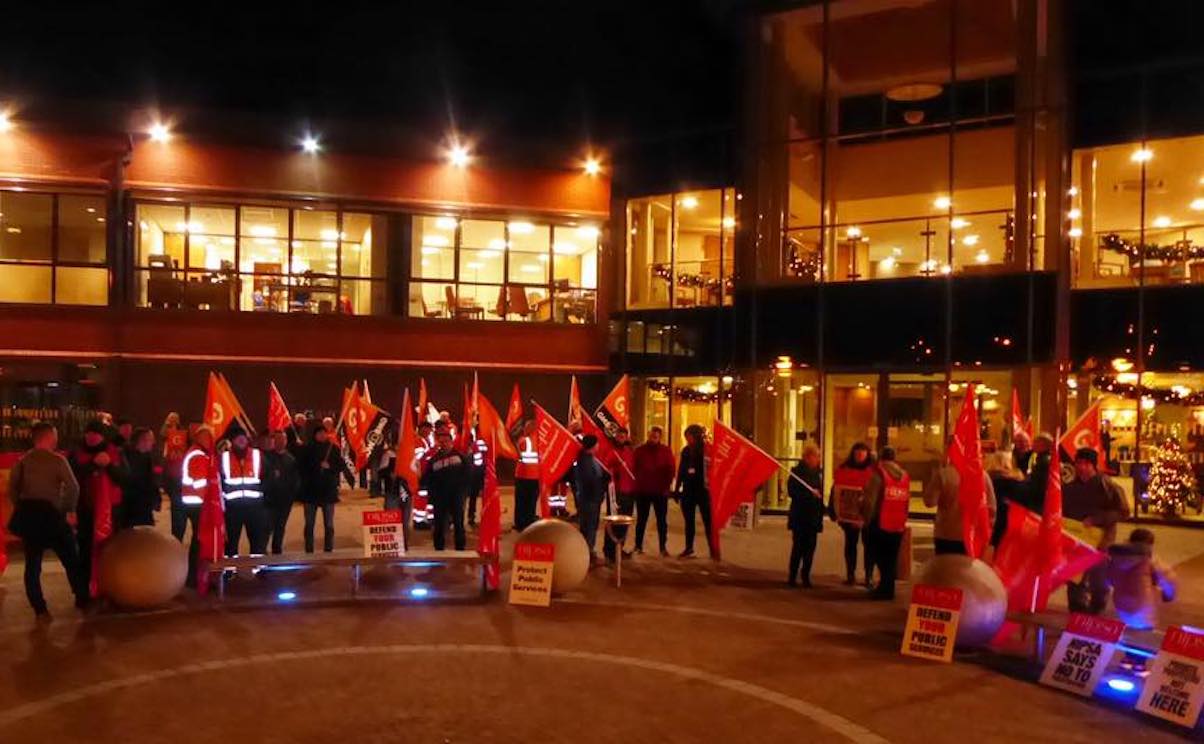 A large crowd of people turned out to protest outside the Craigavon Civic Centre last night (Monday).

The protestors assembled at the Council HQ ahead of the monthly meeting, where all ABC councillors were due in attendance.

Groups included Nipsa and GMB unions, as well as those from the Save Craigavon City Park group.

The unions were opposing the potential threat of privatisation of the new South Lake Leisure Centre.

Kelly Laverty of the Save Craigavon Park group praised those who braved the cold weather, while blasting most of the councillors who failed to engage with the group.

“We were delighted that MLA Doug Beattie came out again to support us,” said Ms Laverty.

Adding: “We also think that it is an absolute disgrace that only one of our local elected representatives, councillor David Jones, came out to speak to us. The rest watched out the window above.

“We expect a decision in the new year and if this development is passed, our legal team are sitting ready to apply for a judicial review.”

Kelly, who acts as spokesperson for the group, said she, and the group, welcome a new facility “for the education of our young people, but City Park is not the right place to build it, we only have one park, while SRC had a choice of sites.

“It is our firm belief that Council are trying to create a waterfront town centre in the middle of our park.

“SRC and the new leisure centre are the centre pieces of the development at the lakes and there is much more planned. We have over 6,500 signatures on our petition and there are over 360 written objections to the planning application.

Ms Laverty said her group are trying to build relationships with traders in Lurgan and Portadown because “we believe that taking the students out of the town centre could be economically devastating for their trade”.

She continued: “The roads infrastructure won’t support it as was demonstrated on Black Friday when the new petrol station had a sale on fuel.

“The roads were backed up in all directions and we were informed of several accidents. This is the main arterial route for the hospital.”

Speaking ahead of the planned protest on Monday night, a Council spokesperson said: “Elected representatives have not made any decision on the operating model for the new leisure centre. They will consider a range of options over the coming months.”