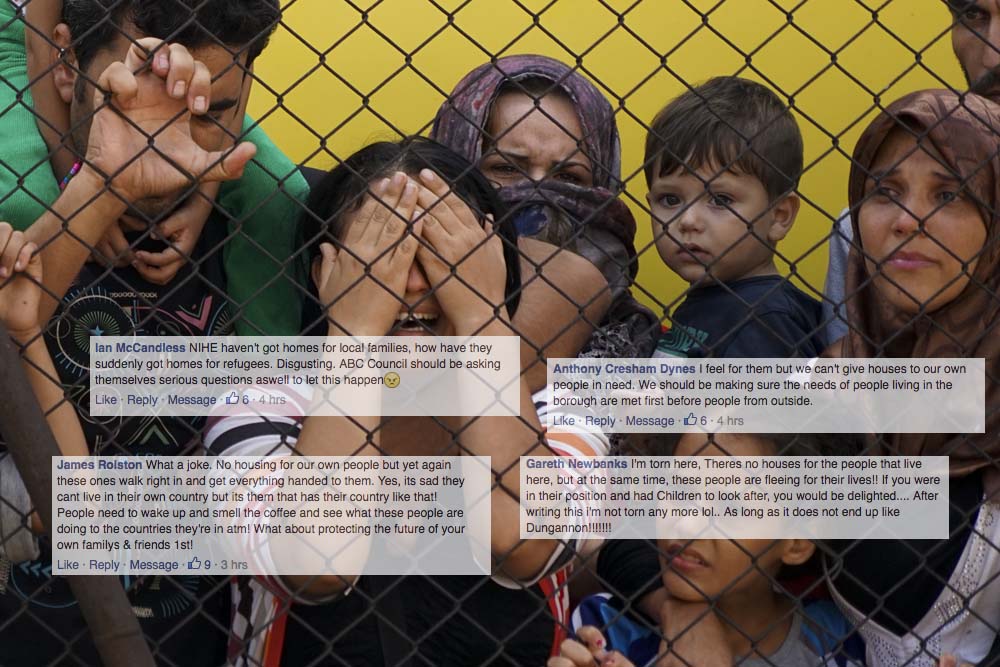 Armagh I readers have been reacting to the news that  the latest wave of Syrian refugees into Northern Ireland will be coming to the ABC Borough, as we exclusively revealed earlier this morning.

Armagh City, Banbridge and Craigavon Borough Council established a refugee working group some months back to facilitate the arrival of some of those affected by the crisis.

On Sunday, we reported that a local health service plan had been put in place.

Sources have indicated that approximately 16 families are due to arrive in Northern Ireland on Tuesday, June 28.

It’s fair to say the news has been greeted with a rather mixed reaction.

Ian commented: “NIHE haven’t got homes for local families, how have they suddenly got homes for refugees. Disgusting. ABC Council should be asking themselves serious questions aswell to let this happen.”

James echoed those feelings: “What a joke. No housing for our own people but yet again these ones walk right in and get everything handed to them. Yes, it’s sad they can’t live in their own country but its them that has their country like that! People need to wake up and smell the coffee and see what these people are doing to the countries they’re in atm! What about protecting the future of your own families & friends 1st!”

Anthony added: “I feel for them but we can’t give houses to our own people in need. We should be making sure the needs of people living in the borough are met first before people from outside.”

Daran said: “Wondering how long it will be before they start with their demands for this and that. They need to be told our country our rules don’t like our rules bye bye.”

Judith simply wrote: “A joke thats what it is!!!”

However, not everyone was opposed to the idea.

Owen commented: “Great! All very welcome and anyone going on about helping our own. I’d say these people would very happily go ‘back to where they came from’ but that’s not an option due to the actions of the western world…It’s only right that we should welcome people fleeing similar.”

Siobhan added: “These comments, really! According to some stated figures.. The death toll for 2015 in Syria was: 21179, May 2016 (alone) 872, 2nd June 2016 (one day) 34. These people are not sitting rubbing their hands together thinking of getting on the housing list in a town they have never heard of, they are running. Running for dear life.. To be able to live a day without fear! How can any of you on here begrudge them that!”

Gareth said: I’m torn here, Theres no houses for the people that live here, but at the same time, these people are fleeing for their lives!! If you were in their position and had Children to look after, you would be delighted…. After writing this i’m not torn any more.”

Paul wrote: “Share the love and welcome these refugees into your hearts. Somebody is asking why all the secrecy? Seriously? Have you read the comments? You should be ashamed of yourselves.”

Cliodhna added: “Imagine people trying to flee from war, how awful of them that they want to save themselves and their children!!”