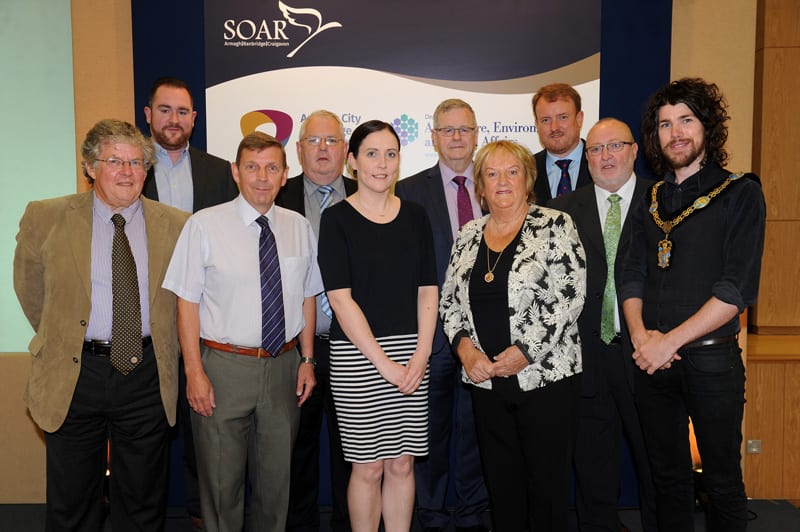 £8.2million of support for rural communities in Armagh City, Banbridge and Craigavon Borough Council area was launched by SOAR (ABC) at its inaugural Rural Conference.

The conference on Friday, June 17 at Craigavon Civic Centre was hosted by the BBC’s Agriculture Correspondent Richard Wright with speakers and delegates from Rural Policy, Broadband, and the Agri-Food Sector.

SOAR’s Chairperson, Councillor Joe Nelson said: “The conference has been designed to complement the funding programme being offered by SOAR (ABC), and the agenda has been developed to stimulate and facilitate discussion, highlight strategic issues affecting rural communities, and recognise the importance of vibrant rural community for a sustainable future.” The Lord Mayor of Armagh City, Banbridge and Craigavon Borough Council, Councillor Garath Keating said: “Our rural communities in the Borough represent a massive 48% of the total population with nearly 100,000 people locally living in rural areas. With our rural areas growing, with more and more business diversifying and growing, it is important that as a Council, we work to meet the needs of our rural areas.”

‘The Agriculture, Environment and Rural Affairs Minister, Michele McIlveen MLA, welcomed the launch of the strategy.

She said: “The SOAR Rural Development Strategy represents an investment of £8.2M in the rural communities in the Armagh City, Banbridge, Craigavon Borough Council area over the next 5 years. It will help stimulate the economy, create employment, improve basic services and promote rural regeneration and is a clear example of my determination to enhance the quality of life for those living in rural areas.”