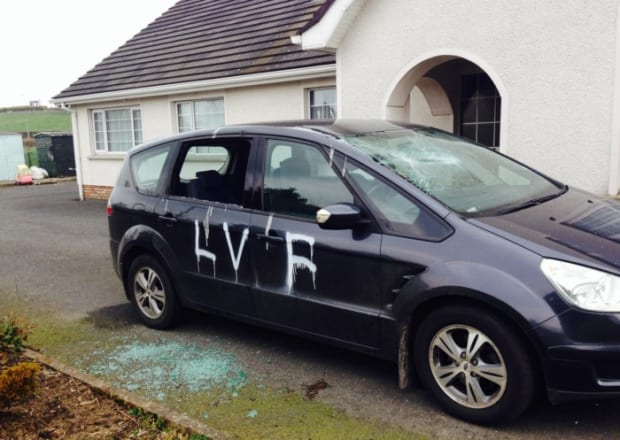 A county Armagh widow and her family were targeted in a sickening sectarian attack just outside Richhill last week.

The family car was smashed up and had the letters ‘LVF’ sprayed on the car.

Elsewhere two more homes on the Kilmore Road had graffiti sprayed on their front door and window. A hammer and tin of spray paint was taken from a garage at one of the houses. A family car smashed up and daubed in graffiti in Richhill

On the neighbouring Crewcatt Road, a car was sprayed with graffiti, again believed to read ‘LVF’.

DUP MLA William Irwin has spoken of his concern following the incidents.

Mr Irwin said that paramilitary graffiti was painted on to vehicles and also windows were smashed on the cars in the two attacks.

“These are very concerning incidents and I have spoken to those affected by the attacks and the families are shaken and very anxious,” he said.

“I have spoken to Police who are fully investigating these attacks and it is important that anyone who may have seen any suspicious activity in the area, immediately passes this information on to the Police. Any snippet of information no matter how small could be a vital in pursuing those behind these attacks.”

He added: “To have property attacked in this way outside your home is very unnerving and worrying and in one of the instances a lady has suffered the loss of her husband in recent years, so this sickening attack only serves to create further distress, it is a despicable incident and I condemn it out rightly.

“There was another attack on a property in this vicinity in recent weeks and it is very concerning that now we have another two attacks carried out in close proximity and so soon after the last incident in the area. I will be continuing to liaise with Police on these matters and it is vital that this type of activity is stamped out.

“In light of these attacks I would be keen to see patrols increased in the wider Richhill area as it is important that the public see a Police response to such incidents and increasing patrols would be a useful method of deterring any future attacks.”