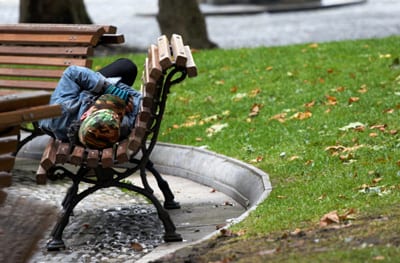 A local councillor has spoken out about his own experiences of ending up homeless and how he turned things around to make a better life.

Independent Kevin McAteer suffered from depression as a result of the rut and says he had to borrow a shirt and tie to attend a job interview to get back on his feet.

The Newry City Councillor Kevin McAteer revealed his own experiences of being homeless following Northern Ireland Housing Executive confirming that over 800 people have presented themselves as homeless in Newry over a two year period.

The young councillor’s experiences happened only nine months before he got elected onto Newry, Mourne and Down Council.

Recent figures show that over 1500 people presented themselves as homeless to the local housing executive between 2013-2015 with over half meeting the “homeless criteria” and being eligible for emergency accommodation.

When he read about these figures Councillor McAteer believed it was time to reveal his own story on being homeless in an effort to raise awareness on the issue and hopefully help others.

He recalled:”In July 2013 due to personal reasons I ended up homeless for nearly two months, I had just finished university had no job, no house and I ended up sofa surfing from house to house. I felt like I was a burden on those who put me up for the night.

“From a mental health point of view I suffered from depression and I was stuck in what I would call a vicious cycle that I couldn’t get out of.

“This happens all the time in Newry particularly amongst young people and that needs to be addressed.

“For me the catalyst of change was to get a job, earn some money and pull myself out of this hole I was in. I remember going to the local library maybe two or three times a day just to use the computer to search the internet for a job.

“I remember the call centre giving me an interview and I borrowed a shirt and tie of a mate for the interview. Two weeks later they gave me a chance and with my first pay check I was able to rent private and get on the right road.

“Nine months later I was elected to the council were I am now in a position of influence to help others who are struggling the same way I did.

“The figures are shocking and we cannot ignore them; for example, 50% of those who have presented themselves as homeless in Newry are under the age of 25.

“We need to raise awareness on the issue of homelessness and support local charities such as the Simon Community as they are getting to a point now where they are stretched thin.

“Also, from a mental health point of view, we need to support those who are homeless and are suffering from depression as a result.”

Appeal over silver hatchback occupants seen in area of burglary