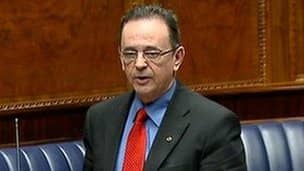 CONCERNS have been raised that many people across the north are left waiting for Freeview Boxes to be installed while others are without access to RTE services a day after the digital switchover.

Newry and Armagh Assembly man Dominic Bradley has lobbied on the issue and at the request of the SDLP Digital UK and the Switchover Help Scheme personnel attended the DCAL Committee to ease concerns over the switchover.

Mr Bradley explained: “It is worrying that many vulnerable people in our society have been left with no access to television. The Switchover Help Scheme, which is run by the BBC, underestimated the number of people in the north who would need to avail of the scheme.

“These miscalculations mean that some people have to wait weeks, even months, to have Freeview boxes installed. An apology was issued by the Help Scheme but this is too little, too late.

“The BBC Help Scheme also drastically underestimated the amount of people who would want to avail of a Freeview HD Box to access the RTE channels. This is not just an obscure technical matter, there are very important social, cultural and political issues at stake.

“Television now plays a central role in people’s lives and the range of services provided by RTE are in fact vital for proper balance in our cultural life.

“The SDLP has lobbied extensively on this and at our request Digital UK came to the Committee to ease concerns that all eventualities had been covered, we have sought assurances that the matter is urgently addressed.

“We acknowledge that with such a large logistical operation, gaps will appear. However, any shortfalls must be plugged as soon as possible.”