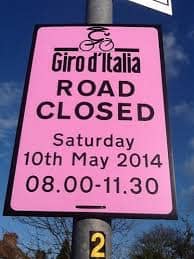 Up to 1,700 pink ‘road closed’ signs which are being put along the route of the Giro d’Italia will be given to Oxfam shops following the race in May.

The public will then be able to buy the signs for a small donation to Oxfam, which is the official charity for the Giro, after is passes through Belfast, the Causeway Coast and Armagh next weekend.

Transport Minister, Danny Kennedy said: “My department is in the process of erecting the pink road closed signs in time for the Giro ‘Big Start’ on 9 May. There has been a lot of interest in the signs with many people asking to keep one as a souvenir and unfortunately I aware that a small number have already been stolen from along the route.

“That is why I have decided to hand over the pink signs to the Giro’s official charity, Oxfam who will sell them to the public for a donation after the race is over on 11 May.

“In the meantime I would appeal to everyone to leave the signs in place as they have a vital role in informing when and where road closures will take place allowing the public to plan their travel arrangements.”

Oxfam Ireland’s Fundraising Manager Kathy Morrow said: “Many thanks to DRD for re-cycling the Giro road signs in aid of Oxfam and helping to break the cycle of poverty. The public will be able to buy the signs in their local Oxfam shop, so as well as picking up a fun memento of cycling history, they will be raising vital funds to support Oxfam’s work with people affected by severe poverty and injustice worldwide.”