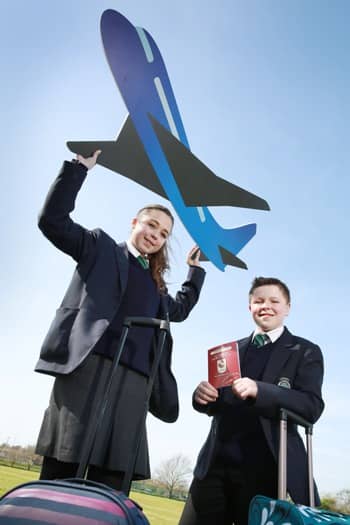 Almost £500,000 has made its way back to consumers’ pockets over the last year after they turned to the Consumer Council for help with their complaint.

And 45 pupils from a Craigavon school were among those celebrating after they, and their teacher, received €11,000 in comopensation following a flight delay on their school trip.

Reflecting the broad range of complaints the Consumer Council deals with, the figure includes a £285,000 refund for a North West hospital following a billing dispute with NI Water, £3,000 for a Ballymena business following damage caused to equipment during a power outage, and €11k for the Co Armagh children left high and dry.

Interim Chief Executive, Aodhan O’Donnell, said: “A great result like this is to be celebrated, especially since it is a record-breaking amount in our 30-year history, and we’ve had more consumers, and in particular businesses, contacting us than ever before. Indeed, many of our biggest wins have been for businesses, who after all are consumers as well.

“We’ve fought the corner of nearly 5,000 individuals and businesses who had electricity, gas, air travel, ferry travel or water complaints. It’s the consumer we’re here to serve, so we are delighted so many have trusted us to help them with everything from simple queries or a request for one of our guides, to issues which are causing them a lot of frustration, distress and, in some cases, expense.

“Our advice, as ever, for consumers and businesses is, get in touch with us.  Not only will we try to help with your complaint, but we will also see if we can lobby and campaign for changes that will benefit all consumers so that others don’t suffer the same issue.”