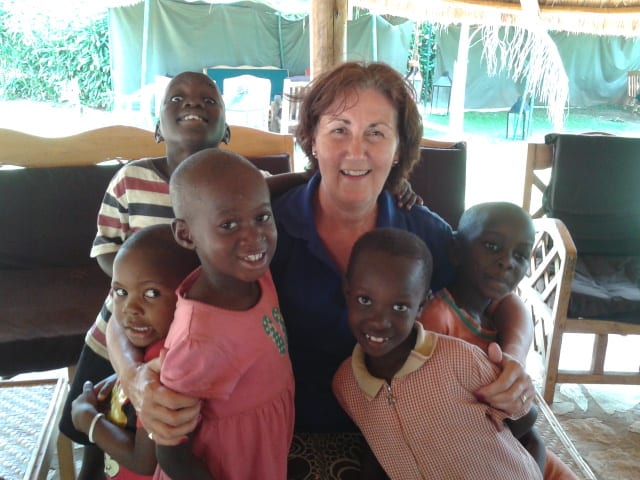 A County Armagh nurse has just returned from a mercy mission to Annaghmore to offer her help and support for orphans and other vulnerable people.

And Millie Jackson hopes that it will not be her last voluntary trip to bring support to those living in poverty.

Millie Jackson, from Annaghmore, is working within the Department of Obstetrics and Gynaecology at Craigavon Area Hospital. And the big-hearted nurse used her annual leave to offer her assistance in Uganda with Fields of Life, a UK-based charity.

Millie Jackson has been a committed worker with the Southern Trust for a large part of her career.

This summer she decided against taking an earned vacation to offer her support for orphans and vulnerable people living in Uganda.

Fields of Life is committed to bringing positive change through the provision of quality education, clean water, health promotion and other community based projects throughout East Africa.

Just over a year ago Millie had been invited to an interview with the charity and was offered the opportunity to travel to Uganda to help those in need – an opportunity she grabbed with both hands.

After eight months of training and weekly meetings, Millie flew out to Uganda with a group of volunteers and joined up with other helpers from Fields of Life.

Having recently returned, she has now spoken about her time away and how she enjoyed putting her skills in health and social care to good use.

“It really was a meaningful and fulfilling trip,” explained Millie. “I found it so rewarding to have been able to use my skills in some way to help those less privileged than we are.

“We carried out such a wide range of tasks – we provided health care, offered sexual education and organised care for unwanted babies. “I spent a bit of time working at a hospital, helping all departments deal with their heavy daily pressures – an experience that helped me appreciate the standards of treatment and facilities we have in Northern Ireland.

“The circumstances were often trying – working in high temperatures, without the usual home comforts and adopting a new culture, but I feel dealing with all those factors will help me progress in my own role at home.”

This wasn’t the first time Millie offered her assistance in Africa – she travelled to Kenya just over 25 years ago on a similar project, and she hopes that her trip to Uganda won’t be her last voluntary adventure.

“I plan on returning when I get the opportunity,” she added. “It’s so satisfying when you see how a short space of time out of your own schedule can have such a massive impact on so many people’s lives.”

“I would like to pay tribute to Millie on behalf of all her friends and colleagues,” she said. “By giving up her own time and sharing her skills to help the people of Uganda she has shown great dedication and compassion as a nurse.

“I am sure she will always draw on this experience in her work and will have lots to share with her colleagues.”

Pictures: Millie Jackson with some of those she helped and befriended on her trip to Uganda with Fields of Life.