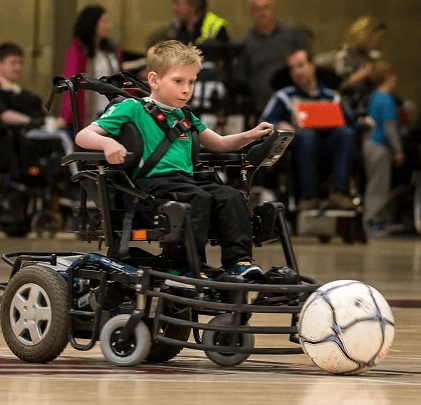 The family of a nine-year-old County Armagh boy fear he could have to give up on his dreams and passion for powerchair football if he cannot buy a specialised wheelchair.

Kingston Bryars is desperately trying to raise funds for a bespoke sports wheelchair that will help him to progress in the sport he loves.

Kingston, who has the condition Spina Bifida Hydrocephalus, plays for Lightening Powerchair Football Club, based at the Lisburn Leisureplex, in Lisburn.

Unfortunately, in order to play, the Portadown boy has to borrow a chair that hampers his posture and mobility.

He’s so determined to get the equipment that he needs that he’s teamed up with Caudwell Children, the national charity that provides practical and emotional support to disabled children and their families, to try and raise the £5,239 needed for a specialist sports chair.

Kingston’s father, Colin Bryars, 35, believes that a new chair would improve his son’s chances of developing in the sport. As he explained: “Players without specially adapted equipment have to share the clubs spare chairs. This can result in Kingston having to play in the wrong size chair, or using one with foot straps that don’t fit properly.”

This, says Colin, makes it difficult for Kingston to sit in the correct position, making it hard for him to pass and shoot.

“It’s a little like a footballer playing in the wrong sized boots!” he explained. “To enable Kingston to perform to the maximum of his ability he needs something that’s made to measure.”

Kingston is a huge football fan and Colin says the wheelchair version of the sport has given him new found confidence.

He said: “Kingston attends Fleming Fulton Special Needs School, in Belfast, which is 30 miles away. This means that he can’t play with friends after school.

“Since taking up wheelchair football he has made new friends closer to home, and he’s started to come out of his shell. He has more self-esteem and he really looks forward to the weekend when he can play football with his pals.

“Luckily, he’s excelled at the sport but without a specialist chair both his mother, Linda, and I are fearful that he may be unable to continue playing the game.”

Currently there are only two Powerchair football clubs in the north, which means the team has to travel, once a month, to play competitive matches against clubs in the south.

Although this has entailed travelling as far as Limerick, Colin says this has been a great experience for Kingston.

He said: “The regular trip south of the border has developed a great sense of camaraderie within the team and Kingston is coming into contact with more children, and adults, which has been really good for him.

“If he’s not playing the game he’s either watching his favourite team Liverpool FC on TV, or we’re out watching Rectory Rangers FC, the Daily Mirror Mid Ulster League Division 2 side.”

Kingston’s ambition is to become a football coach but he realises that he may be unable to fulfil his dream without the specialist chair.

As he explained: “I love wheelchair football as it’s perfect for my condition, and it’s really exciting when you’re playing. If I don’t get a new chair I may have to give up, which would be really sad as I’ve made so many new friends. It would also make it difficult for me to become a coach as I still have lots more to learn from playing the game.”

Colin is determined to help his son get a new wheelchair and has already started fundraising.

As he explained: “I’ve secured sponsorship from the Halifax Building Society and received a donation from Craigavon Council. I’m also organising a pool competition and I’ll be running raffles and auctions.

“Kingston has flourished since taking up wheelchair football and not playing the game is not an option for him. So I’m urging the local community to support his appeal; with their help Kingston may fulfil his dream.”

Davinia Cann, Family Services Coordinator for Caudwell Children, said: “This equipment will enable Kingston’s continued development both on and off the pitch. Unbelievably, there are an estimated 70,000 children in the UK who would benefit from the correct mobility equipment.

“Kinston’s story highlights the kind of support that is needed for children with a condition that affects their mobility. I would urge members of the public to support the family through their Just Giving page so that they can get the equipment that Kingston needs and deserves.”

You can donate to Kingston through his Just Giving page: https://www.justgiving.com/chair4kingston/