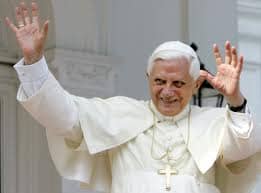 THE CHURCH of Ireland’s Archbishop of Armagh and Primate of All Ireland has paid tribute to Pope Benedict XVI as news of his resignation broke today.

The 85-year-old Catholic Pontiff announced that he is to step down after eight years due to his advancing age and declining health.

And The Most Revd Dr Richard Clarke expressed his surprise at the news – a sentiment that has been echoed across the world.

“I share with people throughout the world a real surprise at the news of the decision of Pope Benedict XVI to relinquish office at the end of this month,” he said.

“At the same time, we must all – of whatever Christian tradition – wish him well and pray every blessing of God for him in the future that awaits him beyond his tenure of the See of Rome. We should in addition express a warm gratitude for the example of total dedication, humility and service that Pope Benedict displayed throughout his ministry.

“A scholar of great intelligence and learning, he was also a deeply self–effacing and spiritual human being. His clear devotion to the Lordship of Jesus Christ shines out in his prolific literary heritage to us.

“Having just returned from an annual ecumenical meeting of bishops in Rome that I have attended for the past ten years, one brief incident springs immediately to mind. A couple of days ago, the bishops –  gathered in Rome from all over the world by the Sant’ Egidio Community – watched a DVD of the Pope on a recent visit to an old peoples’ home run by the Community in that city.

“Pope Benedict at one point said to the old people, quietly and with no theatrical intent, ‘I am here not only as your Bishop, but as an old man in the company of other old people’. This comment now seems somehow prophetic.

“In saluting the Pope for his humility and sanctified practicality in making this decision, we again thank him for his faithfulness to God’s calling and wish for him every blessing of the God whom he has served so consistently through his life.”